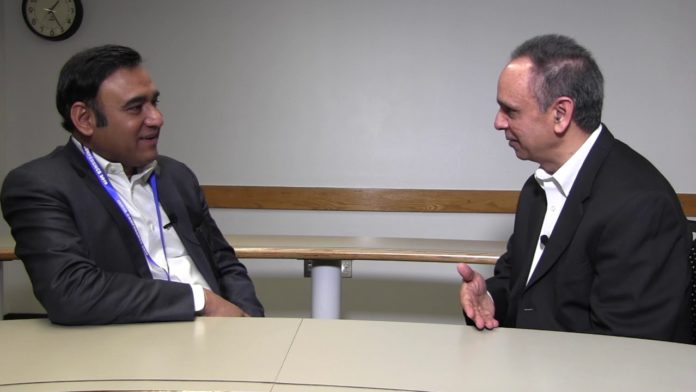 CAMBRIDGE, MA—Indian companies are having a big impact on investments and direct and indirect jobs creations in the United States, says Vivek Sharma, CEO of Piramal Pharma Solutions, which provides research, development and manufacturing services towards the life sciences industry.

“Indian companies have been investing and creating a lot of value for America and for American people,” Mr. Sharma told INDIA New England News just before speaking at Harvard’s India Conference on “Indian Roots, American Soil.”

He said his firm has invested about $800 million in Massachusetts alone and a total of about $1 billion across the United States.

To watch the full 7-minute video interview, please click here or on the image below.

He said there is a misconception that Indians are taking jobs away from America.

“Indian companies are also creating a lot of employment in America and also investing a lot of money,” said Mr. Sharma, adding that Indian companies have invested about $17 billion to $18 billion in the United States according to a survey by Confederation of Indian Industries.

He said that number is conservative as many companies do not participate in surveys. His estimate will be double of that amount. Mr. Sharma also said that Indian companies have created about 115,000 direct jobs in the United States.

Mr. Sharma joined the Piramal group in 2011 to lead the Piramal Critical Care business. By focusing on strategies that emphasized operational efficiencies and geographical expansion, he led the business towards improved profitability and rapid growth. The Critical Care business is now the third largest in the world, and the fastest growing Inhalation Anesthetics company globally.

Prior to Piramal, Mr. Sharma was with THL Partners, a Boston based global private equity firm. As THL’s Managing Director, he was tasked with value creation among several THL’s portfolio companies, and worked with their respective management teams to achieve growth and profitability objectives. Prior to THL, he held leadership positions in Finance and Operations at AMD & Motorola.

Mr. Sharma is based in Boston and has over 25 years of Global management experience, and has been listed among ‘The Top 100 Finance Professionals in the United States’. He is a Chartered Accountant from India, a qualified CPA, and also holds a Masters in International Business from Thunderbird School of Management.