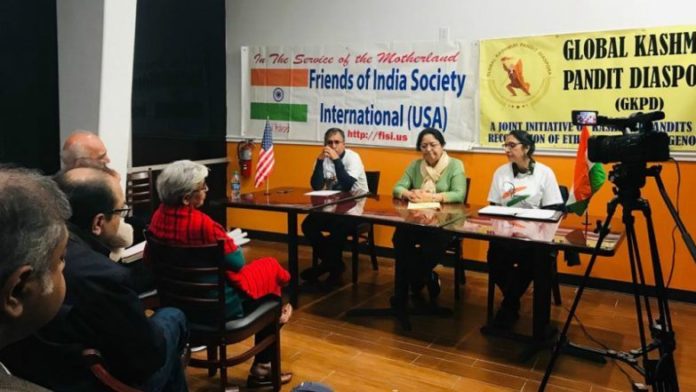 Houston–The Houston chapters of Global Kashmiri Pandit Diaspora (GKPD) and Friends of India Society International took out a protest against Pakistans state policy on terrorism that has penetrated deep into India and spread its tentacles globally.

There was huge sloganeering against Pakistan that they termed as the “terror hub”.

“Terror hub – Pakistan”, “Down with Pakistan”, “Pakistan an architect of Genocide and ethnic cleansing of Kashmiri Hindus and Sikhs”, “Pakistan – take care of your minorities”, were just a few of the loud slogans being raised.

Achalesh Amar, Coordinator of Houston Chapter of Friends of India Society International, highlighted the global ramifications of terror and role of Pakistan in exporting it to the world, threatening the civil society at large.

Amar emphasised on the role of Pakistan providing shelter to Al Qaeda leaders and providing safe havens and sanctuaries for dreaded terrorists to regroup and export terror machinery in other parts of the world after the fall of Afghanistan’s Taliban regime in 2001.

He further stated how Osama bin Laden, an architect of 9/11 was found well protected in the garrison city (Abbottabad) of Pakistan.

Amar also pointed at the connection London Bombing and terror shooting at San Bernardino, California which had Pakistan connection.

GKPD’s Veena Ambardar spoke about the proxy war unleashed by Pakistan on India under Zia Doctrine in 1988 under the code word “Operation Tupac”.

She highlighted the salient features of this operation which encouraged cross-border terrorism, guerilla warfare in India fully supported and led by Pakistan’s ISI and Army regulars.

Ambardar made reference to Kargil, where the nexus between Pakistan sponsored jihadi and their ISI and Army regulars was exposed at international level.

“This proxy war has cost India losing more than 6,000 of its security personnel besides heavy collateral damage and Genocide and Ethnic cleansing of peace loving indigenous Kashmiri Hindus and Sikhs where in more than 4,00,000 members were ethnically cleansed and are forced to live as refugees in India,” Ambardar added.

Munni Mohan from GKPD talked about the brutal killings of more than 1,400 members of Kashmiri Hindus and Sikhs that resulted in the worst genocide and ethnic cleansing of minorities from Kashmir.

She stated that Jammu and Kashmir became part of India through a legal document as an instrument of accession as was followed by other princely states in India.

She reiterated that the illegal occupation of Pakistan administered Kashmir is the only unresolved agenda about Kashmir and this part needs to be returned to its legal owner that is India.

She described the democracy in Jammu and Kashmir as “vibrant”, in which the residents of the state have been overwhelmingly participating and choosing their elected governments.

Jammu and Ladakh overwhelmingly claim to be proud Indians, she said.

She added that the current unrest in the valley is happening in small pockets of Kashmir at the instance of cross-border terrorism emanating from Pakistan. (IANS)