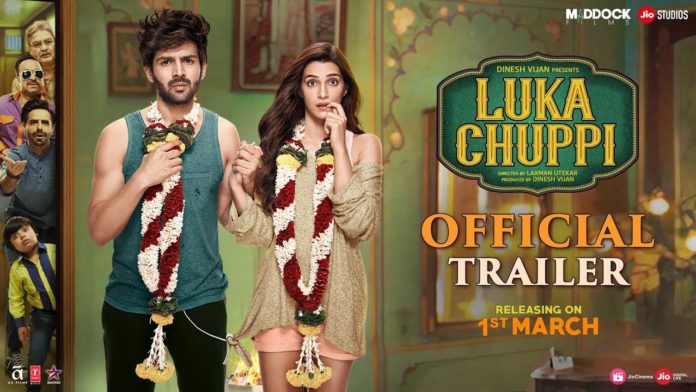 Set in Mathura, Director Laxman Utekar’s “Luka Chuppi” is a straight-laced, frothy rom-com that panders to the concept of a “live-in-relationship”.

You never know where the heart is going to lead, and often, it is to the most inappropriate places. This is what happens when Guddu Shukla (Kartik) the anchor of a local cable channel, professes his love to Rashmi (Kriti), the daughter of a local politician Trivediji (Vinay), who is not commitment-phobic but a cautious young lady of today’s generation.

She unabashedly tells him that she would want to indulge in a “live-in-relationship” to test their compatibility, before committing to get married.

Left with no choice and on the suggestion of their mutual friend, Abbas (Aparshakti), the two go to Gwalior and start “living together” claiming to be married.

How their relationship unspools to their respective families, forms the crux of the tale.

The writing by Rohan Shankar, rarely misses the rom-com beat despite its predictable and meandering plot that drags. It is not a wickedly humourous narrative, but yes the film has its moments of fun and thrill, with situational and slap-stick comedy.

The dialogues are colloquial, witty and laced with the right amount of funniness that is relatable. What keeps you glued to the screen, are the unfaltering performances by the abled cast in well-etched characters.

While Kartik as Guddu is charismatic and Kriti as Rashmi is charming, their on-screen chemistry is perfunctory, nevertheless they bring the right amount of energy and realism to their characters, playing their roles with convivial ease and flourish.

The pair is ably supported by a plethora of actors, who are impressive and true to the characters they portray.

Leading the pack is Pankaj Tripathi as Guddu’s sister-in-law’s brother Babulal. Dressed in outlandish outfits and with superb comic timing, he is a laugh riot on screen. Accompanying him in sparkling the light moments is the actor playing Guddu’s older brother Vikas.

On the directorial front, some scenes were not astutely crafted, especially the prologue, the denouement and the scenes with the nosy neighbour in Gwalior. They made the film appear amateurish and lazily mounted. The sermonising at the end too, appears forced.

The mater-of-fact lensing by Milind Jog too, does not elevate the cinematic experience. His frames capture the decent production values that highlight its moderate mise-en-scene in a very televisual manner.

Overall, despite its short-comings, “Luka Chuppi” is a feel-good entertainer. (IANS)