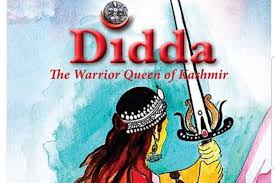 New Delhi–A valiant story set in the resplendent landscapes of 10th century Kashmir – “Didda: The Warrior Queen of Kashmir” – remembers a brave warrior who overcame her gender and disability, to be etched in history forever. As the world celebrates womanhood, this story stands out like no other.

A book, based on the extraordinary life of a powerful disabled woman who went on to learn and exhibit the 52 arts of war and ruled Kashmir for about 54 years (950-1003 AD), is an ode to the larger fraternity of women in power and polity.

It is penned by Ashish Kaul, a business leader and author of “Refugee Camp”, who heard about queen Didda from his grandmother who hailed from the Paranotsa (now Poonch) royal family lineage. Since he heard of Didda, her story kept him awake for years.

“Didda: The Warrior Queen of Kashmir” (Rupa/ Rs 295/ 214 pages) opens with an introduction to King Kshem Gupt, who would eventually marry the princess of the Lohar dynasty, after falling in love with her.

Her marital life, not without a fair share of trials and tribulations, with the debauched king soon had her at crossroads, when he died. The exemplary queen refused to jump into her husband’s funeral pyre (the practice of ‘sati’) and took over the empire’s reigns.

Replete with pages on Didda’s rigourous war training, including a faceoff with a ferocious tiger, which she mastered despite a crippled leg she was born with, the book takes the readers into an engagingly detailed narrative of events, which feel like these are unfolding in front of their own eyes.

In her foreword to the period novel, Rio Paralympics silver medalist and Arjuna Awardee Deepa Malik gives an overview of Didda’s journey from a little infant about to be abandoned by her father, to becoming the remarkable warrior queen.

“Not only did Didda overcome her disability and hold together a kingdom that was on the verge of disintegration, she also created a much larger empire and an administration that ushered prosperity for her people.

“In her lifespan of 77 years, Didda became an enigma and an icon that sent shivers down her enemies’ spines. People saw Didda as a cold-hearted, cruel woman, not realising that she had sacrificed a lot to build a vast kingdom to fulfil the last wish of her dying husband,” Malik wrote.

Recreating a story that was “buried and forgotten” for over a millennium, Kaul has managed to turn the spotlight on an important historical actor of the region.

An inspiration to the warrior within every woman, the story of Didda is a timeless one. (IANS)