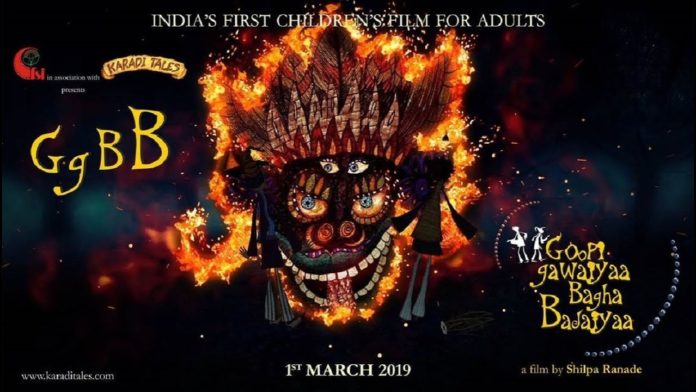 A bright, bouncy, cheerful, effervescent tribute to Satyajit Ray’s 1969 children’s classic “Goopy Gyne Bagha Byne” is a step forward for animation films, a genre still in its infancy in Indian cinema, groping around in the dark trying to find a competitive ground with the likes of “Frozen”, “Moana”, “Lego” and “Inside Out” in Hollywood.

Animation is big business in the West. In Indian cinema it hasn’t even started to make an impact given the bleak and bland scenario and the fact that it must compete with feature films like “Luka Chuppi” and “Sonchiriya” this week.

“Goopi Gawaiya Bagha Bajaiya” does well for itself, at least as far as telling an engaging story in a credible colourful animation format goes.

For those who came in late (and please don’t do that, this is just a brief film barely more than an hour long), this is the story of two bumbling, goofy but endearing musicians and their escapades in an imaginary kingdom of fools.

The plot, based on Upendrakishore Ray Chowdhury’s classic story, is zany to the utmost.

The animation characters are reasonably well-handled. But the real backbone of the film is the music by Three Brothers & a Violin. It adds a layer of prankish lustre to the going-on. This weekend, take your young ones for a joyful ride into the kingdom of magic. This could be their introduction to the world of Satyajit Ray. (IANS)