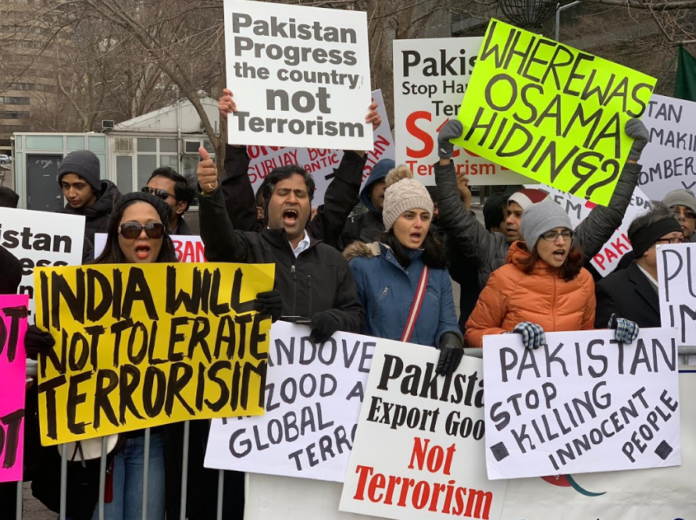 NEW YORK–About 400 people from different nationalities protested against Pakistan outside the United Nations, New York for its cross border terrorism in India and Afghanistan and sponsorship of Global Terrorism. They condemned the dastardly attack on CRPF personnel in Pulwama, Jammu & Kashmir state on Feb 14th, 2018. Forty lives were lost in the cowardly act by Pakistan based Jaish-e-Mohammad headed by Masood Azhar. The protest march was held on March 3.

People from different nationalities including India, Caribbean countries, Bangladesh, Sri Lanka, Israel, Balochistan (part of Pakistan) expressed their solidarity to the protest. Richard Benkin, a Jewish American commented, ‘Pakistan long has been a cancer on the international body politic. It was allowed to get away with sponsored attacks on India for decades, but that timehas passed. A new and strong Indian resolve defends the nation. We all must stand with India and let Pakistan know that its cowardice and support for terror will go unanswered no longer. While it oppresses its own minorities, it lashes out against other, peace-loving nations. Failure to stop Pakistan now only means greater problems and more deaths later’.

A Bangladeshi American from BHBCU (Bangladesh Hindu Buddhist Christian unity Council) commented that half million Bangladeshi women were raped as war booty during Pakistan 1971 war and the world need to understand the scourge of Pakistan establishment. Vincent Bruno, a Hindu American activist said, ‘India has a responsibility to her citizens and the world to end the state bred Islamic terrorism within Pakistani borders. My advice is India take her own in this and not be overly influenced by any foreign power’.

Protesters included young and old from across different Organizations in NY/NJ area, raised slogans about all major terrorist attacks originating from Pakistan such as Mumbai 26/11 attacks, Pulwama and URI attacks, 2001 Indian Parliament attack, 9/11 US attacks, Kabul US Embassy attacks, London bus and subway bombings, Germany embassy attack, extra-judicial killings of activists from Balochistan province of Pakistan perpetrated by those who are nurtured, protected and funded by Pakistani establishment. Slogans and posters threw light on the many terrorist Organizations that grew out of Pakistan soil such as Al-Qaeda, Lakshar-e-Taiba, Jaish-e-Mohammed, Haqqani network, Taliban, Laskshar-e-Omar, Sipah-e-Sahaba, JKLF and their associated terrorists such as Osama Bin Laden, Masood Azhar, Rashid Rauf, Hafiz Saeed, Jalaluddin Haqqani. 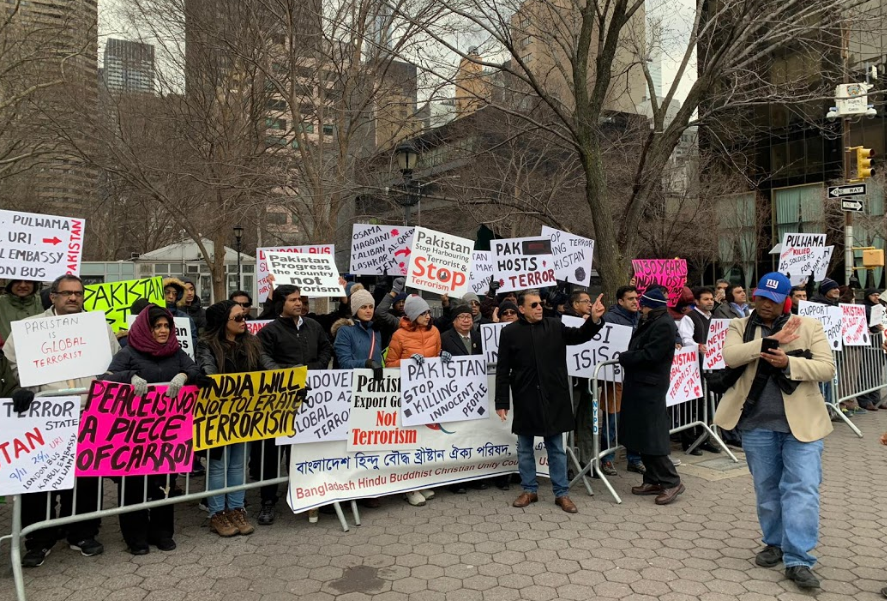 Protestors shed light on the enormous cost to humanity across the world from Pakistan bred terrorism. As per 2015 statistics 47,000 people including security personnel are believed to have lost their lives due to Pakistan supported insurgency in Kashmir, India. Pakistan people are also paying enormous price to the policies of supporting terrorists by Pakistan establishment. While Indian leaders have reached out to Pakistan for peace many times, Pakistan answered with terror attacks every time.

The protestors demanded that UN should make Pakistan accountable for Pulwama, Mumbai and other terror attacks, to dismantle the infrastructure of terrorism and ban all terrorist organizations operating from Pakistan’s soil, hand-over Masood Azhar to India to face trial, set free Kulbhushan Jadhav immediately and hand-over international criminal Dawood Ibrahim.

Pakistan has been ruled by military dictators over half of its independence. Pakistan army must understand that their actions have serious consequences. Protestors urged UN and the world community to sanction Pakistan’s army generals and ISI leadership, freeze their assets around the world, declare Pakistan as a Global Terrorist State and Masood Azhar as a Global Terrorist. These people must be brought to justice for abetting the terrorist activities around the globe. A memorandum is being mailed to Secretary-General of the United Nations Mr. Antonio Guterres.