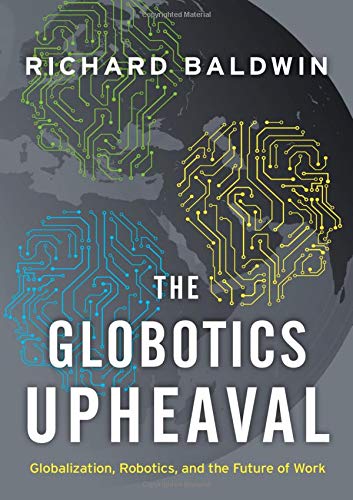 Predictions about job crisis that the advent of robotics and artificial intelligence may unleash in developing as well as developed nations have been doing the rounds for some years now but this timely, well researched book by one of the world’s leading globalisation experts, argues that the speed and nature of this transformation may threaten our capacity to adapt to the expected changes.

Using the term “Globotics” to describe globalisation in the era of robotics, the author Richard Baldwin, maintains that it is different from automation and globalisation for two big reasons: “It is coming inhumanly fast and it will seem unbelievably unfair.”

The book focuses on describing the nature of work in the future and attempts to prepare its prospective readers for the changes. Baldin notes, and discusses at length, the many facets of working life. In doing so, he touches upon different industries — ranging from telecommunications to translations — as well as the work patterns and inherent talents of the workers.

Once the setting for the nature of work in the future is laid, Baldin, who has previously authored “The Great Convergence”, sets on to characterise the work that intelligent robots, advanced softwares and artificial intelligence technology, can do today.

He notes that there is a great deal of work that is already being done through artificial intelligence today, and points out, quite hysterically, that readers at large may even be unaware of some of the minute ways in which the nature of jobs have already undergone change in the 21st century.

Baldwin then attempts to understand, and convey to his readers, how the advancement in artificial intelligence may enable robots to perform many more tasks in the coming years.

He then compares the two: what the robots and artificial intelligence are able to do today and what they can do in the future. This comparison becomes the fulcrum around which his arguments in the book revolve.

He contends that while it may be the case so far that the blue-collar jobs were affected by the rise of robotics, but in the future it will have serious implications on the white-collar jobs too.

The author points out that over the course of the last century, people and industries across the world have understood the significance of applying their mind to things. He maintains that the working culture at large across the globe has undergone a paradigm shift, wherein workers are relying on their heads, rather than, as they would earlier, rely on their hands.

In the future, however, workers across the globe may have to depend on their hearts, more than their hands and heads because while the machines are being prepared to do almost everything that human hands and minds can achieve, they, according to Baldwin, won’t be able to perform the tasks of basic human abilities, such as compassion, face-to-face contact and creativity.

The jobs that are based on these human attributes will be safe for a few decades at least, suggest his findings in the book.

“The Globotics Upheaval: Globalization, Robotics and the Future of Work” is written in simple, accessible language, is footnoted with appropriate references and explanations, wherever required, and makes for an engaging read if one is looking to understand the future of the world we live in.

The book was published in January by Orion Press in the UK, and is now available here, via Hachette India. (IANS)