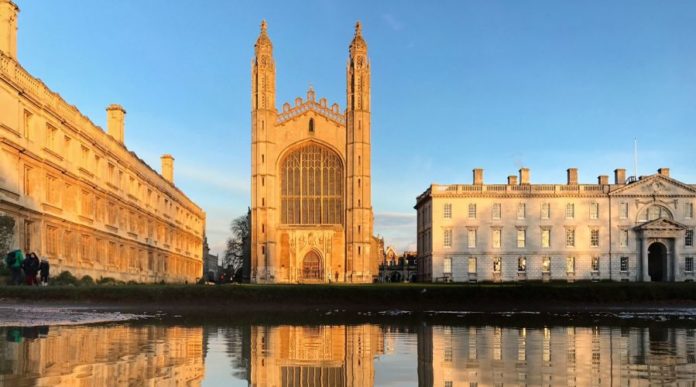 WASHINGTON, DC–Thirty-four of the most academically outstanding and socially committed US citizens have been selected to be part of the 2019 class of Gates Cambridge Scholars at the University of Cambridge. Five of them are Indian-Americans.

The US Scholars-elect, who will take up their awards this October, are from 37 universities. They will study and research subjects ranging from cybersecurity, choral music and technology biases to neurotrauma in low-resource settings and skeletal stem cells.

Since the first class in 2001 there have been more than 1,600 Gates Cambridge Scholars from over 100 countries who represent more than 600 universities globally (more than 200 in the USA) and more than 80 academic departments and all 31 Colleges at Cambridge.

In addition to outstanding academic achievement the programme places emphasis on social leadership in its selection process as its mission is to create a global network of future leaders committed to improving the lives of others.

The US Scholars-elect will join about 60 Scholars from other parts of the world, who will be announced in early April after interviews in late March, so completing  the class of 2019. The class of 2019 will join current Gates Cambridge Scholars in October to form a community of approximately 220 Scholars in residence at the world-leading University of Cambridge.

Sriram will be pursuing an MPhil in Technology Policy from Hughes Hall. He is a graduate of Rutgers University with a Bachelor of Science in Public Policy & Bachelor of Arts in Computer Science, concentration in Urban Informatics.

Nandamudi is a Psychology graduate from Yale University in New Haven, Conn. He will pursue a PhD in Biological Science at the MRC Cognition and Brain Sciences Unit in Downing College. His studies at Cambridge will focus on exploring the neuroscientific relationship between stress and memory control.

Jain will his MPhil in Biological Science at the Wellcome Trust Sanger Institute  at Churchill College. Originally from South Africa, attended Stanford University, studying physics and computer science. At Cambridge, he says he will use a combination of experimental and computational approaches to study the genetic basis of complex disease, he says on his biographical sketch.

Mummidivarapu will be do her MPhil on the History and Philosophy of Science and Medicine at Newnham College.  As an Indian émigré raised in the Silicon Valley, she says she found that the progressive views of the area juxtaposed the cultural and religious aspects of her heritage. She is a graduate of the University of California (Davis) in Biochemistry and Molecular Biology.

Sridhar, who will get his Masters from Tsinghua University in 2020, and a Bachelors from Stanford University in Economics this year, will be an MRes in Strategy, Marketing, and Operations from St John’s College. Working with the Centre for Risk Studies, Sridhar hopes to conduct research in partnership with government agencies, insurance companies, and computer science researchers to elucidate the cyber threat.

Professor Barry Everitt FRS, Provost of the Gates Cambridge Trust, said: “The Trust is delighted to have awarded Gates Cambridge Scholarships to outstanding students from the USA in the first of its two selection rounds for entry in 2019. The US Scholars-elect have been selected to reflect the mission of the Bill and Melinda Gates Foundation’s generous and historic gift to the University of Cambridge. Like their predecessors, they are an extraordinarily impressive and diverse group who have already achieved much in terms of their academic studies and leadership abilities and have already shown their commitment to improving the lives of others in a multitude of ways. We are particularly delighted that we were able to offer awards to a large number of PhD scholars.  We are sure that the entire class of 2019 will flourish in the vibrant, international community at Cambridge as Gates Cambridge Scholars and that they will make a substantial impact in their fields and to the wider global community.”