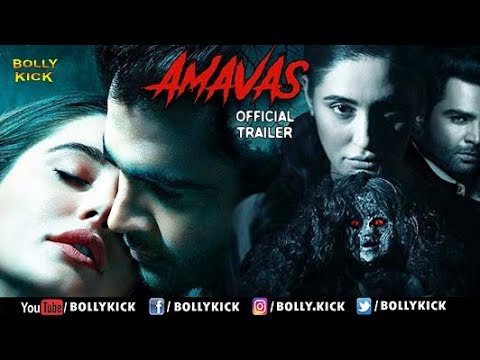 Director Bushan Patel’s “Amavas” will surely top the catalogue as the worst horror-action-thriller in recent times.

Set in the UK, the film begins with an expressionless Karan Ajmera (Sachiin Joshi) wanting to surprise his girlfriend Aahana (Nargis Fakhri) by taking her to an exotic location for a romantic holiday with the intention of proposing marriage.

But Aahana, after stumbling upon pictures of an abandoned castle in one of Karan’s old album, insists on visiting it. Karan is reluctant but agrees to take her there after being coaxed by his mother.

The spooky, abandoned castle, happens to be the Ajmera summer home and it has its own history.

This sets the ball rolling for a freewheeling ride of ineffective horror tropes that range from: nightmares to supernatural activities to shadow scares and jump-cuts to non-diegetic sounds of heavy footsteps, creaking doors and tolling of church bells.

The card-board thin plot meanders. The first half of the narrative is pure pain. The third act picks up momentum but gets entangled in its own convoluted logic and as such the film appears to be an unintentional comedy. Equally tedious is the denouement.

If the story is absurd and thoughtlessly crafted, the dialogues are pure garbage. A couple of them are innuendoes that strike as blatantly obscene.

On the performance front, Sachiin Joshi lacks screen presence and energy. As Karan, he is totally unimpressive. In certain scenes, especially when there are two or more actors in the same frame, he appears frozen stiff and in others he sleep walks though his act. In fact he does not even make any effort to lip sync the lyrics of the songs he is supposed to be singing.

Ali Asgar, armed with facial prosthetic, is unrecognisable. As the talkative butler Goti, he is interesting and amusing, but is wasted in a poorly crafted role.

Visually, the screen is plastered with dark frames to create an eerie atmosphere, but in the bargain what you get is bland darkness that robs you of all the visual delight.

The special effects are the only saving grace that offers some insanely eruptive imagery but they are lost in the dull and absurd telling.

Similarly, the songs mesh seamlessly into the narrative but due to its poor picturisation you care less about them.

Overall, there are no squeamish or twitchy moments in the film hence, it is advisable to stay indoors than to venture out to see this “Amavas”. (IANS)