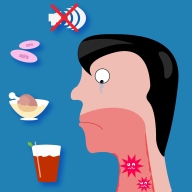 London– A persistent sore throat combined with shortness of breath, problems in swallowing or an ear ache is an indication of laryngeal cancer rather than hoarseness alone, a new study warns.

Hoarseness, which is a symptom and not a disease, describes abnormal voice changes where the voice may sound breathy, raspy, strained or there may be changes in volume (loudness) or pitch (how high or low the voice is).

Laryngeal or larynx cancer is one of the most common types of head and neck cancer. Use of tobacco products and drinking too much alcohol can heighten the risk of this cancer.

The study of more than 800 patients diagnosed with cancer of the larynx has found more than a 5 per cent risk of cancer from a persistent sore throat combined with one of these other symptoms.

This compares with a 2.7 per cent risk for hoarseness alone, said the study published in the British Journal of General Practice.

The research aims to facilitate earlier detection of cancer, which is the key in getting the best survival rates and health outcomes for patients and also gives greater insight into the combinations of symptoms general practioners (GP) should be alert to when deciding who should be investigated for cancer.

“This research matters — when NICE guidance for cancer investigation was published there was no evidence from GP to guide this — nor to inform GPs. Crucially, hoarseness serious enough to be reported to GPs does warrant investigation,” said Willie Hamilton, Professor at the University of Exeter in Britain.

“Furthermore, our research has shown the potential severity of some symptom combinations previously thought to be low-risk.

“There’s still some way to go and the results of this study really highlight the need to improve the current recommendations for all of the head and neck cancers – which are either incomplete or absent,” said lead author Elizabeth Shephard from the varsity.