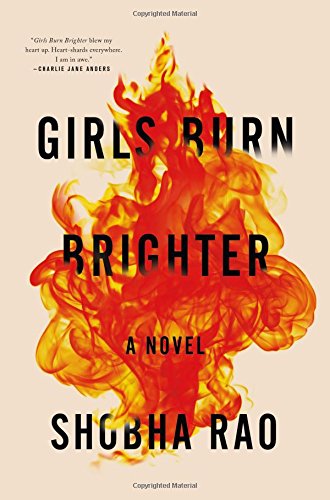 New Delhi– Witness the unbreakable bond of two girls whose ambition beats patriarchy and poverty; live through a true big fat Bollywood romance; tread through the lanes of Kathmandu as a young girl seeks love and her own space in life, and finally, explore how an ‘Orange’ sanyaasi life feels like through the eyes of a child abandoned by the mother.

The IANS Bookshelf has these varied reads this weekend.

Shobha Rao’s debut novel narrates the long struggle of two best friends who go through multiple episodes of physical, mental and emotional abuse and how even after all of that, they “refuse to lose the hope that burns within”.

“Poornima and Savitha, born in poverty, have known little kindness in their lives until they meet as teenagers. When an act of devastating cruelty drives Savitha away, Poornima leaves behind everything she has ever known to find her friend,” the synopsis reads.

The book alternates between the girls’ perspectives as they face insurmountable obstacles on their travels through the darkest corners of India’s underworld and across the ocean.

This book revolves around three different Bollywood-themed fictional love stories and the ups and downs of each relationship, with a pinch of drama and lots of glamour.

Here’s a sneak peek: “When Vicky Behl and Kritika Vadukut meet on the sets of the period drama ‘Ranjha Ranjha’, everyone agreed they had serious chemistry – and not just on screen. But after her devastating break-up with Raunak Rajput, Kritika doesn’t know if she can handle being with another Bollywood actor. If only Vicky wasn’t so damn charming…

“As they dance to romantic numbers and spend time between takes on the glamorous sets of Sudarshana Samarth’s film, they find it hard not to give in to their attraction to each other. But will the pressure and scrutiny of Bollywood allow them a happy ending or will there be a twist in the tale?”

Set in Kathmandu, Shradha Ghale’s debut novel narrates the story of a young girl’s coming of age, her search for love and “her own space in life”. Equally, it draws a telling portrait of Kathmandu – its class and caste divisions, its cosmopolitanism which exists alongside conservative attitudes, and its politics due to which a civil war looms.

“Sumnima Tamule is in a crisis. Her friends at Rhododendron High School – all girls from semi-royal and other rich families – will soon be going abroad, but she, with second-division marks in her final exams, might have to settle for a grimy little college in town. Her parents, plodding away in middle-class Kathmandu, are deeply disappointed, and all their hopes are now pinned on Numa, her sister.

Sundry cousins from their village in far-off Lungla – driven out by poverty and the warring Maoists – come to live with the family, trample upon her privacy, and wage kitchen politics. And, worst of all, Sumnima’s US-returned RJ boyfriend, for whom she has been lying, sneaking around and stealing money from home, keeps her waiting for his phone calls.

It’s a tale worth reading.

Through the book, Tim Guest, a London-based journalist who died in 2009, shares the story of his nomadic childhood when his mother took him to a commune modelled on the teachings of the charismatic Indian guru Bhagwan Shree Rajneesh who preached a doctrine of eastern mysticism, sexual freedom and enjoyed inhaling laughing gas.

The book gives a sneak peek into the life of Tim as he shares photographs of his childhood and how his family grew with the commune.

“Left alone while the adults meditated, chanted and engaged in group therapy, Tim – now known as Yogesh – was free to explore a new world of unsupervised freedom. But life with the Orange people is never simple, and soon the movement begins to turn in on itself, replacing free love and openness with paranoia, surveillance and repression,” the book says. (IANS)