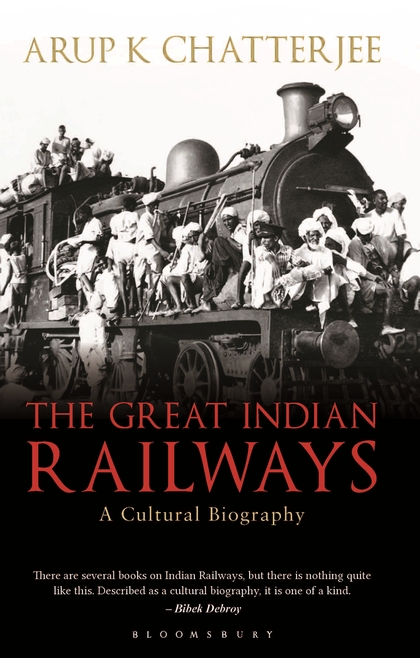 Published by Bloomsbury, it is replete with anecdotes from imperial politics, European and Indian accounts, the battlefronts of the Indian nationalist movement, Indian cinema, songs, advertisements, and much more, in an ever-expanding cultural biography of the Great Indian Railways.

But what is it about the Indian railways that readers do not already know and why should one pick this particular offering?

“There are hundreds of books about the Indian Railways. You’ll find technical books, time tables and railway travelogues, coffee table books, novels and short stories. However there are very few works that talk about the vital role that the railways have played in our cultural history, and that’s where I hope Prof Arup Chatterjee’s engaging book will fill the gap, somewhat,” Paul Vinay Kumar, Publisher-Special Projects, Bloomsbury India told IANS in an email.

Even at the height of the First War of Independence of 1857, Bahadur Shah Zafar promised Indian owned railway tracks for native merchants if Badshahi rule was restored in Delhi.

From Jules Verne to Rudyard Kipling to Mark Twain to Rabindranath Tagore to Nirad C. Chaudhuri to R.K. Narayan and Ruskin Bond — the aura of Indian trains and railway stations have enchanted many writers and poets.

With iconic cinematography from “The Apu Trilogy”, “Aradhana”, “Sonar Kella”, “Sholay”, “Gandhi”, “Dil Se”, “Parineeta”, “Barfi”, “Gangs of Wasseypur”, and several others, Indian cinema has also paved the way for mythical railroads in the national psyche.

“The Great Indian Railways”, according to the publisher, is “one of a kind” awe-inspiring saga and makes for a “compulsive reading”. (IANS)