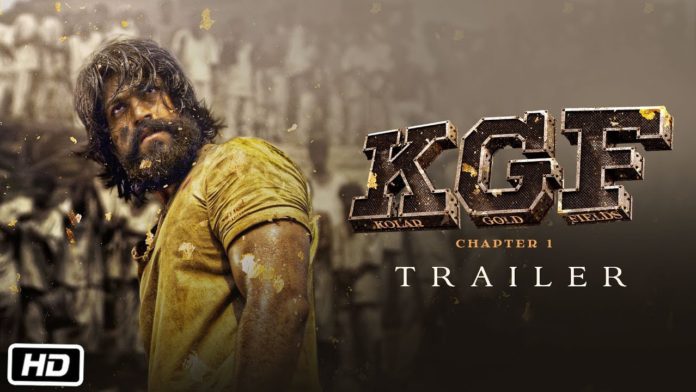 With a larger-than-life character, director Prashanth Neel’s “K.G.F. – Chapter 1” is a period drama depicting the hero’s journey from being a downtrodden to the most “powerful” and dreaded man in town.

Set in 1981 and going back and forth in time, it is Rocky’s tale, narrated from a journalist’s point of view who had chronicled his life from 1951. How he metamorphosed from a timid boy to an ambitious teenager to a fearless gangster, forms the crux of this tale.

Despite being strong, brutal and hard-nosed, Rocky has a heart of gold. His heart bleeds for the poor, helpless and the hungry. In this first chapter, his mission as a mercenary, is a complex and convoluted plan to kill the ruthless owners of the Kolar Gold Field. But during his stay there, he manages to save the lives of the miners who are slaves of the mine owners and thus becomes their messiah.

Released in Hindi, Kannada, Tamil and Telugu, the film has all the trappings of a South Indian potboiler inclusive of stop motion, freeze frame, over-the-top action sequences and melodrama.

The performances of every actor are praiseworthy but with tight close-ups and mid-shots the camera stops us from getting emotionally connected to them. Yash’s endurance, strife and sincerity thus get projected as perfunctory. His dialogues, with blockbuster dramatic lines are noteworthy. He hits the right notes when he says, “If you think I am bad, I am your dad!”

With intense atmospheric lighting, every frame in the film looks aesthetic and natural. Brilliant cinematography and equally challenging action sequences are put together with razor-sharp edits. They give the film a racy pace.

The songs mesh seamlessly in to the narrative especially the song, “Gali, Gali”, picturised on Mouni Roy. It is a remix from “Tridev” and is astutely choreographed. The background score during the climax and end too seems like one borrowed from Salman Khan’s “Sultan”. Its rising notes drum up the emotions, “that powerful people come from powerful place”.

On the flip side, there are a few mismatched dialogues delivered by the children in the mining town which are not in sync with the setting. The snappy edits with parallel cuts, though interesting make the viewing a bit disorienting. Also, the narrative packed with montages laid over on a voice track makes the film appear more passive than active. (IANS)