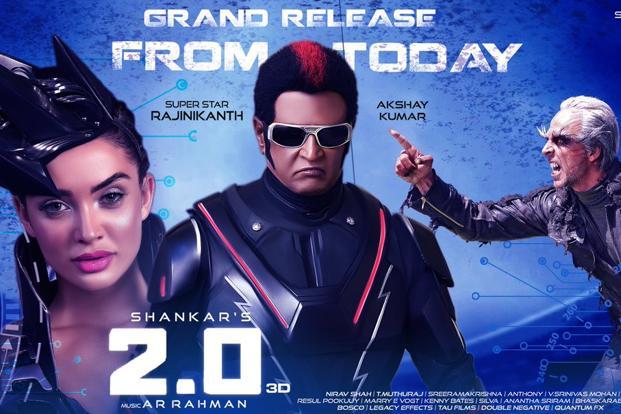 Patience is all you need to watch and appreciate, director S. Shankar’s “2.0”, an epic fantasy involving supernatural powers and events, starring superstar Rajinikanth and Akshay Kumar.

The narrative begins with the ornithologist Pakshi Rajan (Akshay Kumar) committing suicide. Thereafter a supernatural occurrence of mobile phones getting sucked into thin air and later causing mass destruction, baffle the residents of this cinematic universe who are mobile phone crazy.

How the scientist Vasigaran (Rajinikanth) with the help of his “Domestic Purpose Robots”; Neela (Amy Jackson) and Chitti 2.0 (Rajinikanth) solve the mystery, forms the crux of the narrative.

“2.0” is a technically savvy, thought provoking film, but the message of “mobile phone radiation”, is put forth in a very preach-feast manner.

Here, a wafer thin premise is stretched into a two and a half hour tale. The plot is bloated with elaborate, inconsequential VFX and the narrative meanders. The first half is action packed and doused with scientific terminologies. Both bog down the viewing experience and you heave a sigh of relief when the film breaks for intermission. The cacophony of the phone rings and the deafening sound that accompanies the visuals, are what hurt the eardrums.

But the second half takes you by surprise. The first half of this part is the heart and soul of the film. It starts off on a tangent to drive home the pertinent issues of survival and legacies that we will leave behind for the future generations to survive. The climax and the denouement that follows, then trudge on its own beaten path.

On the performance front, Rajinikanth in a triple role is hard to digest. It is hard to believe him as scientist Vasigaran. The character is much younger and seems like the superstar’s clone. But as the Robot Chitti 2.0 and Kutti 3.0 he is perfunctory, as he generally lacks energy on screen.

Akshay Kumar as the silver streaked, world weary Pakshi Rajan is palpable. His back-story adds to his persona and he delivers a heart-rending performance.

Amy Jackson as Neela is eye-candy. Her track adds some lighter moments to the otherwise male-heavy, drab narrative.

Adil Hussain as Home Minister Vijay Kumar has his moments of on-screen glory. Ananth Mahadevan as a scientist is wasted and so is Sudhanshu Pandey in a confusing role as Dhinendra Bohra.

Visually the film is a delight. Be it the visual graphics or the glorious, endangered birds one gets to see on the large screen, each frame is colourful and enticing.

If you watch the film sincerely and the narrative touches you, you’ll return home feeling guilty for using your mobile phones. But alas, this message is diluted and lost in the star-studded narrative.