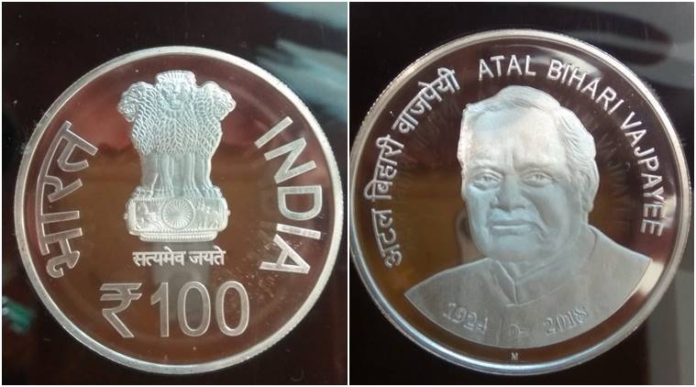 New Delhi–A day ahead of the birth anniversary of former Prime Minister Atal Bihari Vajpayee, his successor Narendra Modi on Monday released a commemorative Rs 100 coin to honour the late leader, who passed away in August.

Addressing a gathering at the Parliament House Annexe here, Modi said Vajpayee never compromised on the ideologies of the party and always spoke about national interest.

“For some people, power is oxygen…they can’t live without it…A long part of Atalji’s career was spent in the opposition benches but he spoke about national interest and never compromised on the ideology of the party.

“I assume that there must be invitations from other ideologies for joining hands to remain in power. Such things must have happened. But he never compromised.

“He was among those who could die for the nation, but would never compromise on the ideologies,” Modi said.

Vajpayee wanted democracy to be supreme. He built the Jana Sangh but when time came to rescue democracy he and others went to the Janata Party, Modi added.

“Likewise, when the choice was between remaining in power or comprising on ideology, he left Janata Party and formed the Bharatiya Janata Party” which “has become among the largest of political parties”, the Prime Minister said.

Hailing Vajpayee as “the best orator”, Modi said “the mind is not ready to believe that Atalji is no longer with us. He was a stalwart loved and respected across all sections of society.

Modi said e would go to Vajpayee’s memorial on Tuesday — his birth anniversary — to reiterate his commitment to the ideology and path shown by the leader.

Commemorative coins are usually issued to celebrate some special occasion or to mark a special event. They also have been issued as a mark of respect towards some distinguished individuals or monument.

The coin, Modi said, is a small effort to show our respect to the former Prime Minister, “whose life is a message for all of us”.

Atal Bihari Vajpayee passed away on August 16 at the age of 93 at the All India Institute of Medical Sciences (AIIMS) here following a prolonged illness. (IANS)