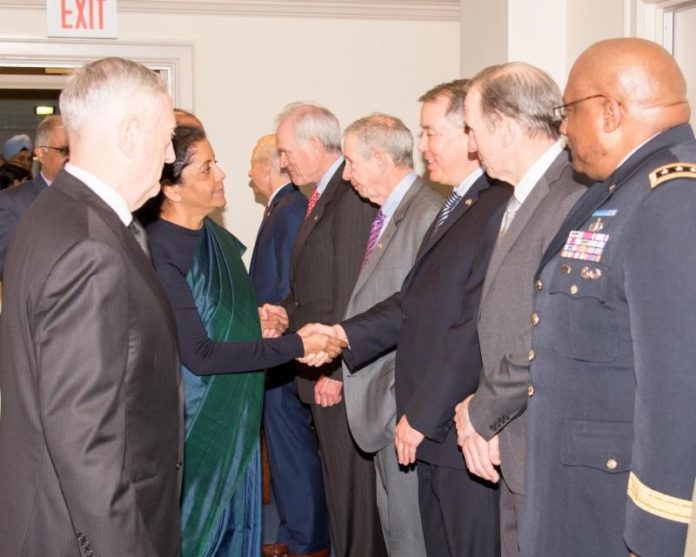 WASHINGTON, DC–Indian Defense Minister Nirmala Sitharaman is on an official visit to the United States  from 2-7 December 2018, at the invitation of US Secretary of Defence James N. Mattis.

In Washington DC on Monday, she had a meeting with Secretary Mattis, who also hosted a dinner in her honor. Prior to the meeting, on her arrival at the Pentagon, she was received by Secretary Mattis and was accorded the Armed Forces Enhanced Honours Cordon welcome.

During their meeting, discussions were held on the growing partnership between India and US in the defence sphere. Views were also exchanged on a broad range of bilateral and international issues of mutual interest. The Ministers reviewed ongoing initiatives to further strengthen bilateral defence cooperation, as a key pillar of the strategic partnership between India and USA. 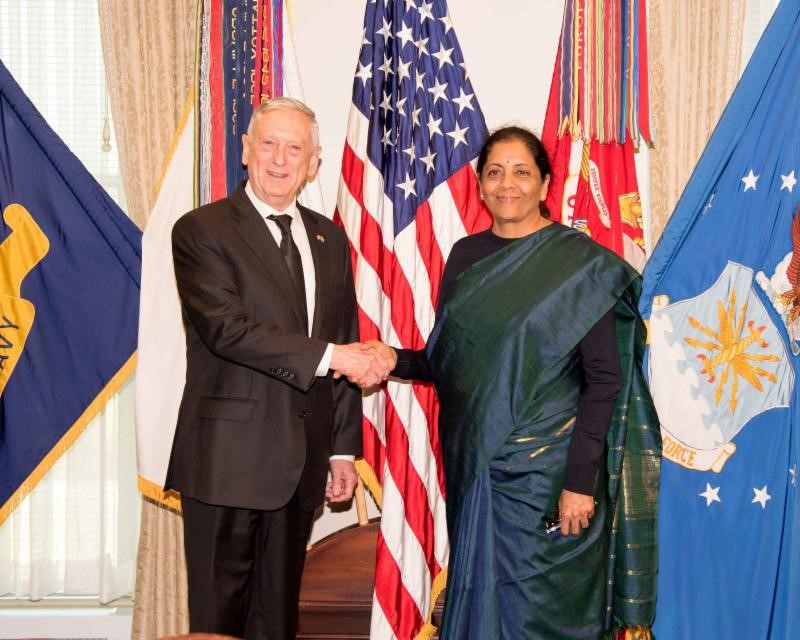 Both sides agreed to further strengthen bilateral defence cooperation, building on the discussions and outcomes of the 2 plus 2 Dialogue held in September 2018. The Indian Minister highlighted the steps taken by Government of India to promote defence sector manufacturing, under Prime Minister Modi’s “Make in India” flag-ship programme.

Earlier in the day, RM visited the U.S. Department of State, where she signed condolence book for former U.S. President George H.W. Bush. She also paid respects at the ‘Tomb of the Unknown Soldier’ by placing a wreath at the Arlington National Cemetery Memorial.

Following her engagements in Washington DC, Sitharaman will be visiting Reno on 4 December, where she will hold interactions with select leaders of Indian community in the US. Later, she will visit San Francisco where she would address a roundtable meeting at Stanford. She will also visit the Defence Innovation Unit [DiU] of the US Department of Defence and interact with start-ups and venture capitalists associated with this Unit.

From 5-7 December, Sitharaman will visit Honolulu, which is the headquarters of the US Pacific Command (PACOM), recently renamed as INDO-PACOM. During the visit, she will hold meetings with Commander of INDO-PACOM, Admiral Philip S. Davidson. She will also visit Joint Base Pearl Harbour Hickam, where she would board a US Guided Missile Destroyer and will be briefed on INDO-PACOM activities.