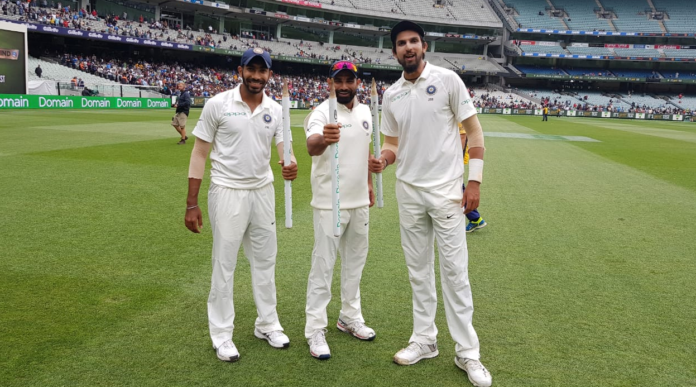 Melbourne–India defeated Australia by 137 runs in the third cricket Test to take a 2-1 lead in the four-match series here at the Melbourne Cricket Ground (MCG) on Sunday.

With the fourth Test starting on January 3, the Indians are now in with a chance to register their first ever series win on the Australian soil.

The play on the fifth and final day was delayed due to rain.

Most of the opening session was lost to the inclement weather, and the play resumed in right earnest only after lunch.

Resuming their second innings at the overnight score of 258/8, the Australian batsmen could battle for only 27 deliveries before being dismissed for 261 runs.

Pat Cummins, who had delayed the Australian defeat with a heroic half-century on the fourth day, was the first to return to the pavilion on the fifth day.

The tail-ender had added only two runs to his overnight score when he edged a delivery from Indian pacer Jasprit Bumrah to Cheteshwar Pujara at first slip.

Cummins scored 63 off 114 balls, hitting five boundaries and a six over the course of his gritty innings.

Ishant Sharma then dismissed Nathan Lyon with a short pitched delivery to complete the victory.

Lyon tried to go for the pull, only to edge a simple catch to wicket-keeper Rishabh Pant.

The victory saw Virat Kohli become the first Indian captain to retain the Border-Gavaskar trophy on the Australian soil. The Indians had clinched the trophy in the 2016-17 season when they pipped Australia 2-1 in a four-Test series at home.

This was Kohli’s 11th away win as captain in 24 Tests. Ganguly had achieved the same number of wins off 28 matches.

The current Indian team has registered four Test wins away from home this year. They thus notched up the most away Test wins by an Indian team in a calendar year. The previous record was three Test wins, all of which were achieved in New Zealand way back in 1968.

Pacer Ishant Sharma, who dismissed Nathan Lyon to complete the victory, became the sixth most successful Indian bowler in Test cricket with 267 wickets to his name.

Fast bowler Jasprit Bumrah also cornered a piece of history by notching up the best-ever figures by an Indian pacer in Australia with his match haul of 9/86. The previous best was achieved by Kapil Dev with his 8/109 during the Adelaide Test in 1985.

Bumrah has claimed 48 wickets in 2018, the best ever by an Indian in his debut year in Test cricket. He is third on the overall list behind former Australian pacer Terry Alderman and former West Indies star Curtly Ambrose.

With 42 dismissals in 2018, India’s rookie wicket-keeper Rishabh Pant equalled former Australian stumper Brad Haddin’s record of most dismissals by a wicket-keeper in his debut calendar year. Haddin had set the record in 2008.

If You Have Never Run, Can You Really Complete a Marathon? Yes, Find Out How