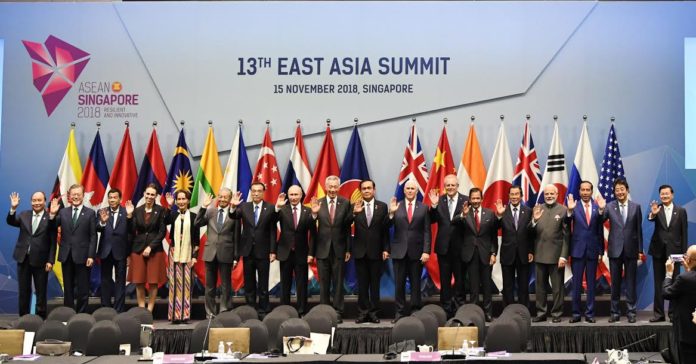 New Delhi– Officials of the quad, revived last year comprising India, the US, Japan, and Australia that seeks to work for peace and prosperity in the Indo-Pacific region, met in Singapore on Thursday on the sidelines of this year’s East Asia Summit.

According to a statement issued by the External Affairs Ministry, the four sides held consultations on regional and global issues of common interest.

“The discussions focused on cooperation in areas such as connectivity, sustainable development, counter-terrorism, non-proliferation and maritime and cyber security, with a view to promoting peace, stability and prosperity in an increasingly inter-connected Indo-Pacific region that the four countries share with each other and with other partners,” the statement said.

Reflecting India’s view, the participants reaffirmed the centrality of the role of the Association of Southeast Asian Nations (Asean) regional bloc as the cornerstone of a free, open and inclusive Indo-Pacific.

In his keynote address at the Shangri-La Dialogue, a Track I annual inter-governmental security forum organised by the International Institute of Strategic Studies (IISS) think tank in Singapore in June, Prime Minister Narendra Modi said that India does not see the Indo-Pacific region as a strategy or as a club of limited members.

“It includes all nations in this geography as also others beyond who have a stake in it. Southeast Asia is at its centre. And, Asean has been and will be central to its future,” Modi said.

According to Thursday’s ministry statement, the four sides “agreed to partner with other countries and forums in the region to promote a free, open, rules-based and inclusive order in the Indo-Pacific that fosters trust and confidence”.

“They committed to strengthening connectivity and quality infrastructure based on sovereignty, equality and territorial integrity of all nations, as well as transparency, economic viability and financial responsibility,” it said.

The meeting assumes significance given China’s growing influence in the Indo-Pacific and its belligerence in the South China Sea region.

The quad officials also exchanged views on recent developments in the regional situation.

The four sides agreed to continue the consultations, according to the statement. (IANS)