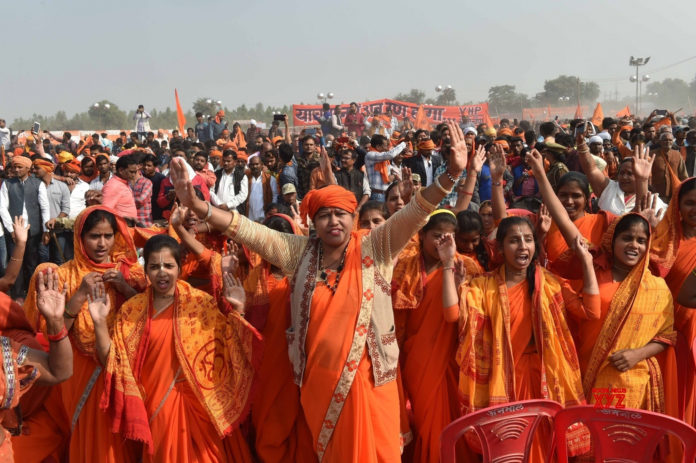 Ayodhya– The ‘Super Sunday’ in Ayodhya passed off peacefully and turned out to be a win-win for all the stakeholders, with the right-wing outfit Vishwa Hindu Parishad (VHP) managing to mobilise crowds for its “Dharma Sabha” and succeeding in bringing the Ram temple issue to centre stage, and the state government successfully warding off any untoward incident.

The Yogi Adityanath government in Uttar Pradesh managed to ensure that the day passes off peacefully, even if this meant twisting some rules and bending backwards to accommodate the converging Hindu faithfuls who wanted the Ram temple to be built at the earliest.

The day started with the Shiv Sena (SS) chief Uddhav Thackeray and his family praying before the Ram Lalla, who has been under a tent since 1992. Emerging out of the 30-minute “darshan”, Thackeray said he felt blessed to be in Ayodhya but the larger feeling was that of “visiting a prison”.

Later at a presser, he told the media that the Narendra Modi government at the Centre and the Bharatiya Janata Party (BJP) government in Uttar Pradesh were “powerful enough” to ensure that a grand Ram temple was built at the earliest. He announced all-out support if the Modi government introduced a Bill or brought an ordinance favouring an early start of building of the Ram temple at the disputed site.

Taking a dig at its ally BJP, Thackeray however rued the fact that while some people chanted “Ram-Ram” during the elections, they got into “aa-ram” mode (relaxed mode) thereafter, alluring to the fact that the BJP has done precious little in the past four years in power to pave way for a Ram temple, as promised in its poll manifesto as well.

He later flew off in a chartered plane to Mumbai but not before ticking off party workers for their “unruly behaviour” at the Laxman Quila grounds on Saturday. He asked them to leave and a train ferrying them back home left the Ayodhya railway station on Sunday evening, one hour before time. A train was sent on Saturday as well.

In the afternoon, the main event — VHP’s “dharma sabha” — was convened. According to district administration’s estimates, a crowd of over 75,000 had gathered to “strategise on the next step to a grand Ram temple”.

VHP’s international Vice President Champat Rai announced that they (Hindus) would not cede an inch of land for anything but a Ram temple and demanded of the Sunni Waqf Board that they withdraw their case over distribution of the disputed land, as ordered by the Allahabad High Court.

Rai went on to add that the issue of land was non-negotiable for Hindus. “The distribution of land is not acceptable to us and we want the whole land for Lord Ram,” he declared.

He also pointed out that the Hindus would not accept offering of “Namaaz” over any piece of the disputed land. Warning that no one should test the patience of the Hindu community anymore, he said they had been battling the matter for the past 490 years.

“Some intelligent people think that the whole matter began after the destruction of the Babri mosque in 1992…they are ignorant…the matter goes back to 490 years,” the VHP leader said.

The “dharm sabha” had to be called after a gap of 25 years because some intellectuals thought that on December 6, 1992 curtains came down on the contentious issue, he said, adding: “The fire has not been extinguished, it continues to simmer inside our hearts.”

Rai asserted that this was last such congregation to press for Ram temple and the next logical step for the Hindu outfit would be beginning of construction of a grand Ram temple in Ayodhya. He also demanded that the Muslim litigants withdraw the case from the Supreme Court and pave way for an early construction of the temple.

Another prominent seer Swamy Bhadracharya, however, announced that future plans of the saint community with regard to the Ram temple would be announced after December 11. This is being seen as a wait-and-watch move by the saints as Prime Minister Narendra Modi at an election rally in Madhya Pradesh earlier in the day accused the Congress of trying to thwart an early solution to the Ram Mandir issue.

He also disclosed that at a recent meeting with a senior and powerful minister in the Modi cabinet, he was assured that “good news will come after December 11”. “I am assured that only the BJP will construct the Ram temple,” he said.

Amid talks of a possible introduction of a Bill by the Modi government in Parliament’s winter session that begins on December 11, many seers are of the view that a “last opportunity should be given to the BJP government on the issue”.

Earlier, hundreds of thousands of VHP workers and supporters trooped into the venue of the “dharm sabha” and Muslim locals showered flower petals on them. Muslim litigant Iqbal Ansari, who had earlier expressed fear at the growing crowds in Ayodhya for the VHP event, on Sunday thanked the Uttar Pradesh government for “good arrangements”.

The police had made heavy deployment of forces to ensure that nothing unlawful happened at Ayodhya. Drones were pressed into service to keep a vigil on the crowds. However, the administration miserably failed in complying to the prohibitory orders in place ahead of the Sunday mega-event as thousands broke the Section 144 to troop into the temple town. (IANS)