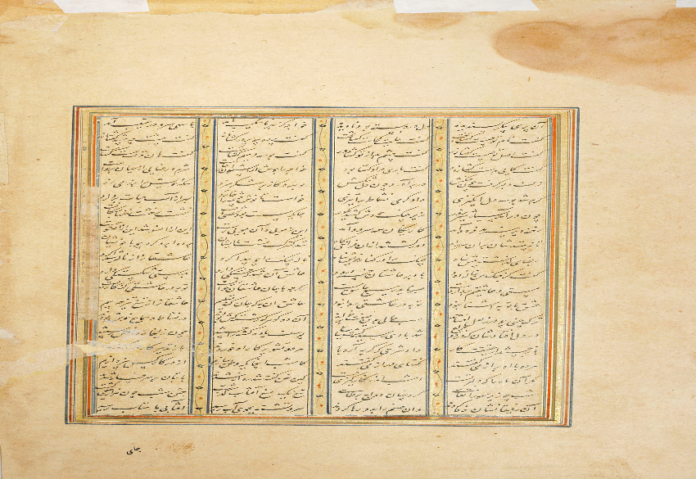 London– Collectors and connoisseurs of Islamic and Indian art are in for a treat as medieval historical artefacts dating between the 9th and the 19th centuries will be on auction at Christie’s London on Thursday.

Illustrations from an early “Baburnama”, gilded manuscripts of the Quran, a 17th century painting of Hindu goddess Bagalamukhi, and a pigment-on-paper work showing Mughal emperor Jahangir on a lion-hunt, will be some of the works that will go under the hammer at the day-long auction titled “Art of the Islamic and Indian Worlds”.

Many cover a geographical area stretching from India in the east to Al-Andalus in modern Spain in the west, Christie’s said in a statement.

On offer will be an illustration by artist Haydar Kashmiri from an early “Baburnama” — an autobiographical account of Babur (1483-1530), who founded the Mughal empire in the Indian subcontinent in 1526.

The illustration shows a battlefield, but interpreters are divided about which war it depicts, with many pointing to the Battle of Kandahar, Christie’s said.

Another striking work on sale would be a painting of the Hindu goddess Bagalamukhi, dating back to 1630s, attributed to Mughal court artist Payag.

This painting of the deity, believed to be among the 10 avatars of Devi that runs parallel to those of Hindu god Vishnu, holds importance as its provenance relates to Mughal patronage.

The auction focussing on Islamic art also showcases gold illuminated manuscripts of the Quran, with carefully preserved parchments also holding some of the earliest forms of calligraphy.

Also on offer are many iconographical paintings relating to Islamic and Indian mythology and court life, including one where the fourth Mughal emperor Jahangir is seen brandishing his sword in front of a lion in a jungle hunt.

The auction, housing many more artefacts, is preceded by an exhibition at Christie’s London, that started on Saturday. (IANS)