Rajkot– After two consecutive away series defeats, India will be desperate to taste victory when they take on an inexperienced West Indies in the first Test of the two-match series at the Saurashtra Cricket Association stadium, starting here on Thursday.

The Virat Kohli-led team India suffered a disastrous 1-4 defeat at the hands of England after enduring a 1-2 series loss against South Africa earlier this year. 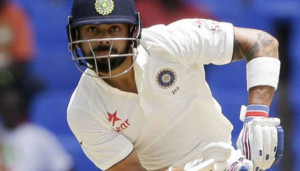 After this home series, India is scheduled to tour Australia and therefore, Kohli and the team management will try their best to shed their shortcomings before the next big series.

On Thursday, as openers Murali Vijay and Shikhar Dhawan have been axed from the squad, young Mumbai batsman Prithvi Shaw is all set to receive his maiden Test cap to open the innings with KL Rahul.

Moreover, after a decent show in first-class cricket, Karnataka opener Mayank Agarwal has been included in the Indian side. However, Mayank is likely to be left out on Thursday but might get a chance in the second Test at Hyderabad.

Wicket-keeper Rishabh Pant too will feature in the playing eleven as skipper Kohli has hinted that he is against making too many changes in the lower-middle order.

“We have a change at the top of the order. We will give these guys enough space and enough chances to feel comfortable at that position. We want them to be confident of what they are doing,” Kohli had said at the pre-match press conference.

“The lower-order is all about contribution, there is no change needed there. Rishabh (Pant) is new but Ashwin and Jadeja have performed in so many games at home they just need to replicate it abroad,” he added.

In the bowling department, Kohli is likely stick to three spinners — Ravichandran Ashwin, Ravindra Jadeja and Kuldeep Yadav. Umesh Yadav and Mohammad Shami will lead the pace attack in the absence of Jasprit Bumrah and Bhuvneshwar Kumar, who have been rested for the short series.

Hanuma Vihari impressed everyone in the last Test against England at The Oval after a fighting 56 on debut. He however, seems not to find a place in the first Test as the team will play with five specialist bowlers.

On the other hand, the Jason Holder-led Caribbean side boasts of some talented cricketers in their squad but lacks the required experience to challenge the No. 1 Test side.

Only five players in the 15-man West Indian squad have played a Test in India. Moreover, another cause of concern for the visitors is Kemar Roach as the pace spearhead will miss the series-opener due to personal reasons.

West Indies had last won a Test series against India in 2002 and it looks difficult for them to beat Kohli’s men at their own backyard.