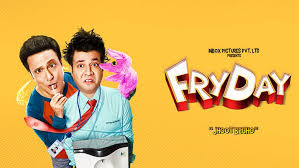 “FryDay” is as slam-bang and preposterous as any slap stick comedy you can name except that it offers wholesome entertainment without getting too offensive.

The plot revolves around a hard working but ineffective salesman Rajiv Chabra (Varun Sharma) who is unable to sell his company’s Pavitra Pani Purifier for months. His immediate boss threatens him with dismissal if he does not sell at least one water purifier by Friday.

At the end of his tether, Rajiv appeals to the Gods, “Mere Friday ko happy day banado.” And lo and behold, he is directed to the house of Gagan Kapoor (Govinda), a popular, but corny theatre actor.

That particular Friday, with his wife Bella (Prabhleen Sandhu) not at home, Gagan invites his girl-friend Bindu (Digangana Suryavanshi) home. With Rajiv showing up to install the water-purifier, Gagan’s plans go for a toss and what follows is a sequence of events which are oft-seen and predictable. Nevertheless, with double entendre and innuendoes, this light-hearted narrative takes you on a roller-coaster, situational-comedy ride.

An ace performer with lines to suit his character, Govinda as Gagan, is an extension of himself. His scene as a theatre actor playing the lines-hungry character Salim, is interesting, amusing and one of the highlights of the film. In the rest of the scenes he plays second-fiddle to the script.

He is aptly supported by: Varun Sharma, who is charming and endearing as Rajiv, Bijendra Kala as the poker-faced thief who breaks into Gagan’s place on the crucial Friday, Rajesh Sharma as Inspector and Bindu’s husband. Each actor performs well and delivers their chops.

In her maiden performance, Digangana Suryavanshi is cute and competent. Prabhleen Sandhu, as Gagan’s wife, holds her steam opposite Govinda.

Sanjay Mishra in a one scene role as the quick-fix marketing guru Manchanda is wasted.

Although the entertainment and comedy quotient of the film is high, there is a distinct Gujarati theatre-feel to the entire film and it seems staged.

Overall, FryDay is a no-brainer, fun film to watch if you want a few laughs and keep you entertained. (IANS)