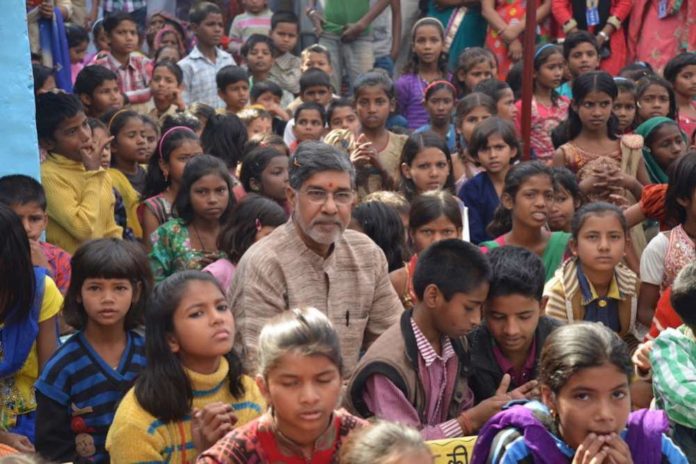 Los Angeles – YouTube announced its acquisition of the award-winning documentary The Price of Free (formerly titled Kailash), a suspenseful yet intimate look at one man’s groundbreaking struggle to liberate every child possible.

From rising  director  Derek  Doneen and producer  Davis  Guggenheim (“An  Inconvenient  Truth”,  “He  Named  Me  Malala”), the film follows Nobel Peace Laureate Kailash Satyarthi and his team of leaders around the world through gripping secret raids and quests for missing children.

As a young man, Kailash Satyarthi promised himself that he would end child slavery in his lifetime. He left a lucrative career as an electrical engineer and started Bachpan Bachao Andolan (Save the Childhood Movement) to rescue children from the shackles of slavery. In the decades since, he has rescued more than 87,000 children and built a global movement including one of the largest civil society movements, the Global March Against Child Labor that demanded an international law on the worst forms of child labor, and the 100 Million Campaign, a youth-driven call to action ensuring every child in the world is free, safe and educated.

A gripping story from start to finish, the film focuses on the spirited children who, released from a nightmare, latch onto a second chance for joy with all they’ve got. The Price of Free seeks to raise awareness on child labor and through the mission of Kailash and his team, build a better future for every child, everywhere.

In combination with its award-winning content, Participant Media invests in social impact campaigns that raise awareness about global challenges and inspire positive change. The Price of Free presents an opportunity to amplify the voice of Kailash Satyarthi, a tireless global activist, and to accelerate the reach and impact of his efforts to end child labor. Working with partners YouTube, Participant, Concordia, the Kailash Satyarthi Children’s Foundation, SoulPancake and the 100 Million Campaign’s Global Day of Action on Nov 14th will empower students, policymakers and business leaders to take action toward a future that is exploitation free. The campaign will provide audiences across the U.S. and worldwide with an opportunity to understand and reflect on why millions of children are trapped in child labor and will provide pathways for those audiences to invest, advocate and lead change in their community and around the world.

“This film shows the real scourge of child trafficking, child labor, slavery and exploitation that is ruining the childhood of millions and ruthlessly crushing their dreams,” says Kailash Satyarthi. “It shares stories of the most marginalized and vulnerable children that I have been fighting for all my life and will continue to. I call on everyone to watch this film and work with us in creating a world where all children are free, healthy, safe and educated – a world where every child is free to be a child. For, if any child is not free then none of us are free.”

“We are incredibly inspired by the heroic work Kailash Satyarthi and his team do everyday,” said Susanne Daniels, Global Head of Original Content, YouTube. “One of YouTube’s missions is to give everyone a voice – and so we are proud to feature such an important and educational documentary that not only gives these young children a voice, but supports Kailash’s mission in giving them the childhood they rightly deserve.”

“At Participant, we tell stories of courageous leaders who stand up and drive change on behalf of those whose voices are not always heard,” said David Linde, CEO of Participant Media.  “We are thrilled to partner with YouTube to amplify these efforts globally by sharing the tremendous story of Kailash Satyarthi who continues to work tirelessly to ensure all children are free, safe and educated.”

“Over the last two years, I’ve followed Kailash on undercover raid and rescue operations to free missing children and reunite them with their families,” said director Derek Doneen. “His tireless work and the hope that these kids displayed as they re-discovered their childhood continues to inspire my daily life. I couldn’t be more excited to partner with YouTube so that we can share this incredible story with audiences around the world. I hope people will join Kailash in his movement to end child labor everywhere.”

Davis Guggenheim, Founder of Concordia Studio, commented: “Having known and worked with Derek since 2010, I couldn’t be more proud of him. He has managed to create both an action film with high stakes and a tender story of hope that might just change the world. To share this film with the world with YouTube is beyond our wildest dreams.”