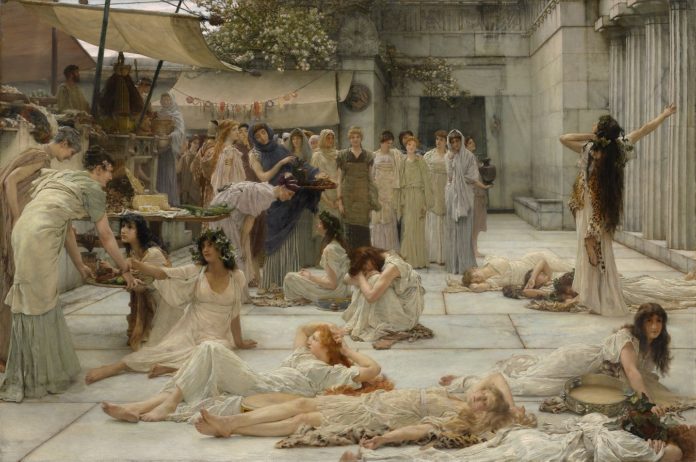 If you were throwing a feast during the Achaemenid Persian era and looking to impress your guests, nothing but a rhyton, animal-shaped and brimming with wine, would do. But the rockin’ parties of 550 B.C. were hardly the only occasion for the beastly vessels.

Based on the Greek word rheo, meaning “to flow,” the rhyton first appeared in Bronze Age Greek civilizations and was mainly used for pouring liquid offerings during religious rituals, frequently out of the hole in the animal’s muzzle onto an altar or the ground. Later, Persian Empire vessels were associated with feasts and would have been poured into a cup, or directly into the mouth, offering revelers a swift (and messy) route to intoxication. Some rhyta were part of sacred ceremonies, while others were buried in tombs or even used in statecraft.

Nearly 60 examples of animal-shaped rhyta, mugs, cups, pitchers and other drinking objects make up a new Harvard Art Museums exhibit that celebrates artistry and the exchange of ideas across cultures and centuries. The show, “Animal-Shaped Vessels from the Ancient World: Feasting with Gods, Heroes, and Kings,” features a range of beasts, including rams, bulls, lions, boars, birds, and even a hippopotamus, fashioned from silver, terracotta, bronze, glass, and other materials. In addition to Harvard-held vessels, the show includes loans from around the world.

“This exhibition really is about people coming together in different senses at a feast, at a celebration, but also coming together internationally and exchanging drinking vessels and thereby also ideas and concepts,” said the show’s curator, Susanne Ebbinghaus, George M.A. Hanfmann Curator of Ancient Art and head of the Division of Asian and Mediterranean Art at Harvard Art Museums.

The core of the exhibit focuses on vessels from the ancient Mediterranean and Near East between 2000 B.C. and 800 A.D., with objects that shed light on feasting practices, religious rituals, burial rites, statecraft, power, privilege, migration, trade, and, perhaps most importantly, fun.

A Greek penchant for play is captured in a range of animal-shaped mugs on view, including a 520–500 B.C. terracotta cup, on loan from the British Museum, that resembles the head of a braying donkey. The thirsty reveler who took a sip would have had his or her face covered by the animal.

Ebbinghaus explains why this 520–500 B.C. cup doubles as a donkey mask.

The forepart of an Achaemenid silver rhyton takes the shape of a griffin, a mythological creature with the head and wings of an eagle and the body of a lion. The fifth- to fourth-century B.C. piece, also a loan from the British Museum, might be considered a type of ancient wedding favor.

“The king handled out silver vessels as a token of allegiance to reward his subjects,” said Ebbinghaus, noting that guests often took them home after a “big royal banquet.”

For a member of the Persian elite, “being able to show off such a drinking vessel that came from the king or one of the governors would have shown your status in the empire,” added Ebbinghaus. “Unsurprisingly, we find that the local elites begin imitating these vessels and reinterpreting them.”

Ebbinghaus talks about the mythological creature depicted in this fifth– to fourth-century B.C. rhyton.

A painted terracotta lion on loan from the Louvre suggests that ancient civilizations sometimes may have favored straws for sipping. The Assyrian lion, which dates to the second millennium B.C., has a spout on its back, indicating it may have been “emptied by drinking tubes,” said Ebbinghaus.

Later objects in the show testify to the enduring popularity of animal-shaped vessels. Vessels dating from the 15th to the 20th centuries include a 1771 English silver cup in the shape of a fox head, and an elaborate “Diana and stag” automaton from Boston’s Museum of Fine Arts. The 1610–1620 German automaton, crafted of silver, can move on its own with the help of a mechanical base.

“We have to imagine some princely banquet where this was used,” said Ebbinghaus. “Its path is random so if it stopped in front of you, you would lift off either the head of the stag if you were a man, or the head of one of the hunting dogs if you were a woman, and you would drain the drink contained within.”

A circa-1960 Georgian drinking horn on loan from the John F. Kennedy Presidential Library and Museum is the most current piece in the exhibition. The horn was a gift from Soviet leader Nikita Khrushchev to Kennedy on the eve of the Cuban Missile crisis. Other works in the show hint at how animal-shaped vessels might have been used, such a Greek vase adorned with the image of man holding a rhyton and a Roman wall painting of a first-century CE banquet.

In the clip above, curator Susanne Ebbinghaus discusses the Cold War significance of this Georgian drinking horn from 1960.

Institutions from Boston to Berlin provided objects for the exhibit. Still, some works on Ebbinghaus’ original wish list had to be abandoned due to their fragile nature, the cost of bringing them to campus, or a milestone birthday.

One treasured piece, a rhyton from Yerevan, had to stay put for the Armenian capital’s 2,800th anniversary.

“You really can’t compete with that,” said Ebbinghaus. “So that one didn’t make it.”

In recognition of a grant from the National Endowment of the Humanities supporting the “Animal-Shaped Vessels” exhibition, the Harvard Art Museums is offering free admission to all visitors on Wednesday afternoons, 1–5 p.m., and on the first Saturday of each month, 10 a.m.–5 p.m, throughout the run of the show.

Ebbinghaus details more vessels in the clips below.

“The Women of Amphissa” and ram head mug depicting a symposium

Thomas Pitts I, Stirrup cup in the form of a fox’s head

Rhyton with a centaur holding a goat

So you’re eligible for a COVID-19 vaccine: Now what?

The Power of Ideas

The Power of Ideas: What Goes On In the Head of a Procrastinator?