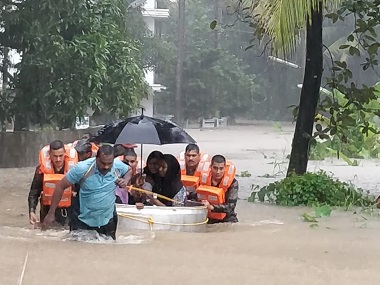 BOSTON—New England Keralites, joined by other Indian-Americans, have already raised $30,700 as of Sunday evening, but wanted to raise at least $50,000 and possibly more by Friday to help victims of the devastating floods in the Southern Indian state of Kerala.

The local fundraiser is organized on Facebook by New England Malayalee Association, a non-profit 501 C-3 organization. Kerala, with a population of about 33 million, is battling the worst flood disaster since 1924. The flood has forced 724,649 people in 5,645 camps in Kerala and has left about 370  people dead and caused unprecedented destruction.

The New England Malayalee Association, known as NEMA, has cancelled its annual Onam celebrations, which was scheduled to be held on Aug. 25.

“We have cancelled the event because we wanted to focus on fundraising,” said Jaya Aravind, a former NEMA President. “We will send the entire money to Chief Minister’s Disaster Relief Fund. It is a very transparent fund. Anyone can see what is happening with the funds raised.”

Ms. Aravind told INDIA New England News that when rains started in Kerala, NEMA had originally sent out to raise only $15,000, but as the situation at home worsened the goal was raised to $50,000.

“People at home need a lot of help to rebuild,” Ms. Aravind said.

If you want to contribute to help Kerala fund victims, please click here.

“NEMA is calling on all everyone to support raise funds to aid recovery efforts. 100% of the money raised will be donated to Kerala Chief Minister’s Disaster Relief Fund. Every little bit helps. Thank you for your support,” the organization’s fundraising page on Facebook said.