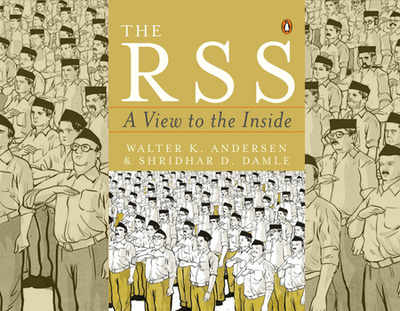 In a book released this week, the Rashtriya Swayamsevak Sangh (RSS) has been projected as “the most influential cultural organisation in India today”. The implications of the Sangh’s functioning on India’s culture, particularly in the context of Hinduism, or what is called Hindutva, is well known but is this projection an appeasement of the all-powerful Sangh by providing them legitimacy in what is billed as a scholarly offering “backed by deep research”, or is it worthy praise bestowed in the light of its work in the culture domain?

The offering at hand is the sum total of all aspects that the authors felt have led the Sangh to take its present shape — that of the ideological parent of the ruling government with country-wide presence and strong political affiliations. It reveals many answers but, for reasons best known to the authors and publisher, it deflects, ignores and often beats around the bush when it comes to tackling the most pertinent issues related to the Sangh in contemporary times.

Let us begin with two chapters in the book titled “Ghar Wapsi” (Homecoming) and “Protecting the Cow”. Both of these issues have gained prominence ever since the current RSS-backed government came to power in 2014 and has led to numerous instances of mob violence and lynching. The horrors arising from some (of many) recorded instances have shaken the nerves of right-thinking individuals and has caused fear among the minorities, but the generosity with which the authors tackle the subject is appalling.

The book elaborates on why protecting the cow and ghar wapsi hold such immense significance for the RSS, charting the beliefs of its idealogues Hedgewar and Golwalkar, and then draws a case study around the BJP’s dealings with the beef issue in the Northeast, where the ruling party sort of accepted it as it is a norm in the region.

It quotes a slew of prominent RSS and BJP leaders who contend, like the Sangh’s prachar pramukh Manmohan Vaidya, that “we (the RSS) don’t tell society what to eat”, adding that even people who eat beef could become its members.

Their assertion, however, is in stark contrast to the ground reality where members of the Sangh’s affiliates have been directly responsible for horrendous acts of violence in the name of the holy cow, dearer to the organisation than those lynched for slaughtering and, supposedly, consuming its meat.

The authors fail to raise tough questions despite their “unprecedented access” to key leaders of the Sangh, who are otherwise largely unapproachable by mainstream media.

And then there is “What Does Hindutva Mean?”, an elaborate chapter on the philosophy of the Sangh. Here again, the Sangh’s leaders paint a rosy picture of all things good in their philosophy. They say, as the book quotes them, that India is “a civilisational nation state” and that the RSS has never talked of making Hinduism a state religion.

The book points, flatteringly, to RSS literature, which, according to the authors, speaks approvingly of the religious and cultural diversities. Again, there is no meeting point between their words and ground realities, and what is more, the authors just let that be, without probing further.

The book goes on to quote RSS chief Mohan Bhagwat as saying that forcing others to chant “Bharat Mata ki Jai” is wrong and that “all people living in the country are our own and we can’t force our ideology and thinking on them”. Really, the authors should have asked some questions here as well, but they do not.

Moving on, there is a chapter on “Indianising Education”, where the authors claim that within months of the BJP’s victory in the 2014 general election, the then HRD Minister Smriti Irani “met with senior RSS figures” who wanted “the essentials of the Indian culture” to be reflected in school curriculum across the country.

It further mentions that in view of the “importance of the HRD Ministry in implementing the RSS goal of ‘indianising’ education”, the party selected Prakash Javadekar to replace the controversial Irani.

“Just a month after assuming his new post, Javadekar called a meeting that included senior RSS and BJP officials and other constituents of the Sangh parivar engaged in education,” the book says.

The motive of this meeting, says the book, was to discuss “the draft education policy earlier initiated by Irani” and to seek “suggestions to instill nationalism, pride and ancient Indian values in modern education”.

Notably, the over-400-page book’s actual text runs till page 256, after which is the appendix and notes section, which go on for about 150 pages. It also charts brief biographies of the RSS leadership, in glowing terms, and its constitution.

Even though this book is a missed opportunity as there is much more — and of utter significance both to the RSS and the country — that demanded exploration, it is not devoid of merit.

This book’s big achievement is in charting the journey of the Sangh — how the once banned organisation came into the mainstream, mobilised voters and played a crucial role in the 2014 general election, as it is expected to play in the coming election too.

But in its totality, the sense that a reader gets after reading this book is a glorification of the Sangh. It describes the inner working mechanisms of the organisation but fails to point out the outcomes resulting thereby.

The book surely has a lot of substance but can one possibly look at a raging fire and ignore those being burnt in it? This book does just that. (IANS)