Washington– Kamala Harris, the first Indian-American to serve in the US Senate, is set to make her first endorsement in an Iowa campaign on Friday, sources said. 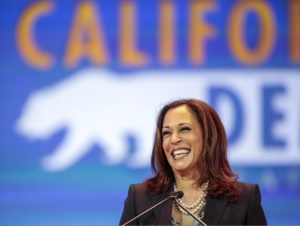 Harris however, is not expected to appear in Iowa for the endorsement announcement.

But her endorsement of DeJear was not unexpected.

Harris’ out-of-California endorsements this year have focused on non-white candidates, including Stacey Abrams in Georgia and Jahana Hayes in Connecticut.

When DeJear won her primary election in June, Harris tweeted: “Congratulations to @DeidreDeJear on being the first black nominee for statewide office in Iowa! Black women have voted at a higher rate than other groups, yet are continually underrepresented in elected office. In 2018, we have a chance to buck that trend.”

DeJear, a businesswoman who worked on former President Barack Obama’s re-election campaign in Iowa in 2012, replied with a tweet calling Harris “a phenomenal role model to us all!” (IANS)