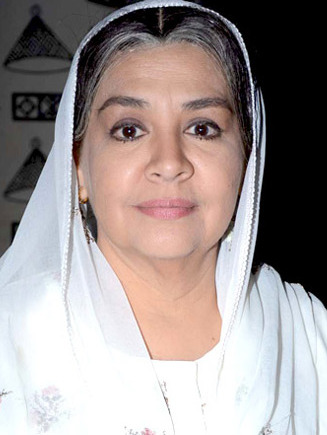 New Delhi– Veteran actress Farida Jalal calls herself a “filmwali to the core”. She loves to act, but is not comfortable with the idea of mouthing dialogues in an unfamiliar language in a regional film.

In her almost 50-year-long career, she has never acted in a regional film.

Asked about it, Farida told IANS in a telephonic interview from Mumbai: “Be it Bhojpuri, Punjabi or Gujarati films, so many offers have come to me. When the actor is not okay with the language, he or she will not say the lines properly — no matter how much he or she learns them by heart. It doesn’t come from the heart because they don’t know what they are saying.

“That kind of hesitation… you will see in my eyes. I am a transparent kind of a person. Whatever I have done…dialogues or shots, I have done with immense confidence. I said no because I don’t know the language and now I am too old to learn a new language.”

But retirement is not on her mind.

“Why should I even think that? Physically you have to be fit… I know that; but when I am on set, I am full of energy,” said the 68-year-old.

She is thrilled about her short film “Mehram”, which had its digital premiere on ZEE5 on Eid. The film is an emotional drama that revolves around an old Muslim woman who is keen on going on Hajj but faces many obstacles.

“I loved what they narrated. It is saying something so I thought that I might as well do this,” she said.

“I am a Muslim and I believe in what my Quran says. In our film, we have shown this woman who is hell-bent on going on Hajj but there is nobody to go with her. She has even collected money for it,” she said.

The film raises questions about religion and gender.

Personally, she will “never ever go against what my religion has taught me” irrespective of the number of characters she plays on-screen.

“You can’t distort the rules that are laid down. There are reasons behind these rules,” she said.

“Mehram” released on a digital platform and she is happy about it. “It reaches a bigger audience.”

But she believes in the “magic of celluloid”.

“It takes you to another world. I don’t think there is any kind of a replacement for celluloid,” said the actress, known for films like “Bobby”, “Aradhana”, “Kaho Naa… Pyaar Hai” and “Student of the Year”.

Farida has often played a mother on the big screen. Has the definition of a mother changed with time in Bollywood?

“It’s gone. Where are the roles? They (current roles) are caricatures of roles that we have done. What would be exciting for me to do such roles all over again? They don’t go into the background of heroes and heroines. It is very rare,” she said.

She has one film, “Batti Gul Meter Chalu”, ready to release next month.

“I like the man who is making it — Shree Narayan Singh. He is very humble. I had seen ‘Toilet: Ek Prem Katha’ and I loved it. He said something so important in a woman’s life and it was a love story. So well done.

“It (her role in ‘Batti Gul…’) is not a meaty or lengthy role at all. It was fun working with Shahid Kapoor and Shraddha Kapoor. Such nice people. I play her (Shraddha’s) dadi. I loved doing the film,” said Farida.

Farida is also a popular face on television. She has starred in shows like “Shararat”, “Balika Vadhu” and “Satrangi Sasural”.

“There are so many good offers. But doing a daily soap is not easy. I am first of all a ‘filmwali’. So, I need to give some space to do a film. If I get a film, I will jump on that. If I do a daily soap, it won’t be possible (to do films) because you have to give 20 to 25 days of a month.

“I don’t want to commit myself totally to television. I won’t do that. Films will always be my priority. I am ‘filmwali’ to the core,” she signed off. (IANS)