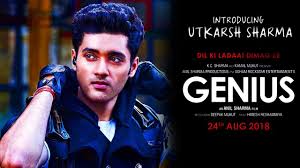 There is something amiable about Utkarsh Sharma, the hero of this film. He is earnest and charming but unfortunately a misfit for the character Vasudev Shastri aka Genius, he plays.

This larger than life, superhero character dwarfs Utkarsh’s personality and portrays him like a cardboard puppet and the fault lies squarely on his father Anil Sharma’s shoulder, the writer-director of this film.

Narrated in a non-linear and convoluted manner, the film is a mishmash of genres. What starts off as an action thriller, switches gear to a chirpy, romantic film and back to action-drama with a patriotic tinge, by mid-point the film gets tedious to watch. The plot marred with cinematic liberties, makes the narrative seem incredulous.

The narrative begins at Porbandar Docks in Gujarat, where Vasudev is dramatically injured in a shootout. Seven months later, with a defective leg and a hearing-aid, he strides into the National Security Advisor’s office to claim his position as the head of TOCSI (Team of Crime and Special Investigation), where he is ruthlessly disgraced for being handicapped with “tinnitus”. He is then thrown out of the organisation for being a liability.

While he is sulking and sinking into depression, his immediate boss, Mr. Das calls Vasudev’s girlfriend Nandini (Ishitha Chauhan) from the US to take care of Vasudev. We get into flashback informing us how the two meet and separate. With a string of songs this act seems like a musical.

Then, Nandini takes Vasudev to her home in Lakshadweep to recuperate. Here he pretends to hallucinate about his former colleagues and once again gets himself roped into mission MRS, that is to eliminate an enemy of the country.

Now diagnosed with schizophrenia, how he fights the terrorists all by himself, forms the crux of this genius’ tale.

What bogs the narrative is the amateur conceptualisation and its writing. The dialogues too are trashy. Sample this – When one of his detractors ask Vasudev’s boss Mr. Das, “Kya Vasudev Shastri kanoon se bada hai?”

On the performance front, debutants Utkarsh Sharma and Ishitha Chauhan are fairly confident and competent.

Mithun Chakraborty is a spent force. Ayesha Jhulka is wasted as Nandini’s mother. And while clowning through his character, Nawazuddin Siddique cracks his position with his intense acting, in just one scene where he describes how he killed his parents.

The film is shot on a lavish scale with ace production values. The music of the film is composed by Himesh Reshammiya and the background score by Monty Sharma. But what stand out is the fine sound designed by Resul Pookutty.

At the end, the in depth explanation of a genius seems forced. (IANS)