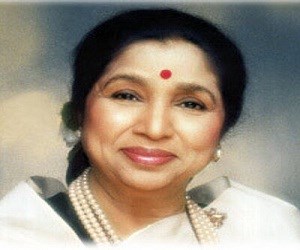 Impossible for anyone to take Kishore Kumar’s place: Asha Bhosle

Mumbai– Veteran singer Asha Bhosle says late singer Kishore Kumar was one of a kind and it is impossible for anyone to take his place.

While shooting for an episode of the music reality show “Dil Hai Hindustani 2”, Asha spoke about one of her favourite co-singers Kishore Kumar, read a statement.

She even shared anecdotes about recording the song “Eena meena deeka” from the 1957 film “Aasha”.

“Kishore Kumar was one of a kind. He swayed everyone with his mellifluous voice and even made everyone around him happy always,” Asha said.

“He has been a true gem to the music industry. I have always enjoyed working with him. It is really impossible for anyone to take his place today,” she added.

“A lot of people asked me why I was blushing! Well I have loved Shah Rukh sir since ‘Fauji’! Finally he introduces characters of my most loved show! And I shoot with him! I am gushing blushing! ‘Kasautii Zindagii Kay’ mug shot,” Ekta tweeted along with a picture with Shah Rukh.

Now a reboot is coming on Star Plus.

Mumbai– Actress Richa Chadha has faced casting couch “a couple of times”, but she says she never chose that route even if it would have made life easier for her.

An outspoken actress, Richa shared her thoughts on matters of casting couch in web show “The Girl Tribe”, read a statement.

Talking about how it’s not imperative to go through casting couch in order to make it in the industry, Richa said: “It is something that women and men, who want to get into the business, must know – I have only got roles based auditions or if somebody has seen a film of mine and I have been cast again. It is like taking the stairs as opposed to taking the elevator, but it’s possible.”

On being questioned about whether she has faced instances of casting couch, Richa said: “Oh yes, absolutely, a couple of times. I have felt like they were really low rung idiotic morons. Although, I was just starting out and it would have made my life easier that is not the path I will ever choose because I feel this is an art form and there has to be some amount of purity in it.”

I was always intrigued by army: Siddhanth Kapoor

Mumbai–Actor Siddhanth Kapoor, who will next be seen playing an Indian Army officer in J.P. Dutta’s film “Paltan”, says the profession always intrigued him.

The “Haseena Parkar” actor is known for playing grey characters in films. So, it was a great change for him to play an Indian Army officer.

“I was always very intrigued by army. I love their uniform, tanks, guns and everything. So when I was approached for this film, it was an instant yes from my side,” Siddhanth said in a statement.

“It didn’t strike me till I got the uniform in my hand and I wore it. It was an emotional moment for me,” he added.

“Paltan” is releasing next month.

She will perform the play, presented by theatre production company AGP World, on September 8 at Kamani Auditorium here.

A story of sibling rivalry, “Mirror Mirror” traces the relationship between identical twins Minal and Maanya, essayed by Minissha. In its 75-minute narrative, the play will tell the story of a woman placed in the most extraordinary circumstances that forever change her destiny, said a statement.

Hasan, who has also written the play, said: “‘Mirror Mirror’ is a psychological roller-coaster ride that will keep the audience on the edge of their seats. It’s a great exercise for any actor, since performing 13 different characters on stage is no mean feat. I’m excited about the premiere show in New Delhi.”

Ashvin Gidwani, Producer and Managing Director, AGP World, said: “Minissha Lamba, in her debut performance on stage, plays the main lead and her performance will leave the audience in awe and wanting for more.

“This edge of the seat and gritty drama will keep you guessing till the last moment.”

Mumbai– Actresses Shubhangi Atre and Farnaz Shetty share what are the several traits that make a man the perfect husband.

Shubhangi Atre, popular as Angoori Bhabhi from “Bhabiji Ghar Par Hain”, said in a statement: “I believe in today’s time, the most important quality in a man is his belief in equality and the ability to treat his wife with the same respect. Dominance and superiority were traits that men proudly carried once upon a time, but in this new age, it’s not something that women like or appreciate.

“In a marriage, a husband is a companion and I believe it’s necessary for a companion to be his wife’s best friend and support her through all her victories and failures.”

“Siddhivinayak” actress Farnaz Shetty said the most important thing that a woman should look for in her life partner is how he loves and accepts his woman just the way she is.

“Bitti Business Wali” actress Prakruti Mishra considers the idea of having a ‘Perfect Pati’ a myth.

“We all have our own imperfections, but the one that you choose to love and live with the rest of your life, should love you back with the same fervour,” she said.

&TV’s upcoming fiction offering, “Perfect Pati”, will bring forth a new outlook to a woman’s decision of choosing her life companion.

A fan named Karen Grewal from Chicago sent a message to Arjun. It read: “I am deaf and use American sign language. I am a fan of Arjun Kapoor. I need your help. Whenever I see Arjun Live on Instagram or on his stories when he speaks, I cannot understand. Can you have him create English subtitles so I can read?”.

Arjun then took to Twitter, where he shared a minute-long video, where he is seen using hand gestures to convey his message to the fan.

“Hi Karen, I hope you are doing well. Thank you for your love. I will always try to entertain you, wish you all the success and love, hope to see you soon. Love.”

The 32-year-old actor captioned the video: “We actors are blessed in more ways than we realise but more so because we have wonderful fans. As much as my fan clubs and fans do not believe it, I am aware and keep track of everything that happens, what they mail me, send me, message me, tweet to me or Instagram post for me.”

On the acting front, Arjun is currently busy shooting for “India’s Most Wanted”.

Arjun plays an intelligence officer in the film, which will be shot in Nepal and Delhi. The film will be about finding and arresting a terrorist during a secret mission. (IANS)