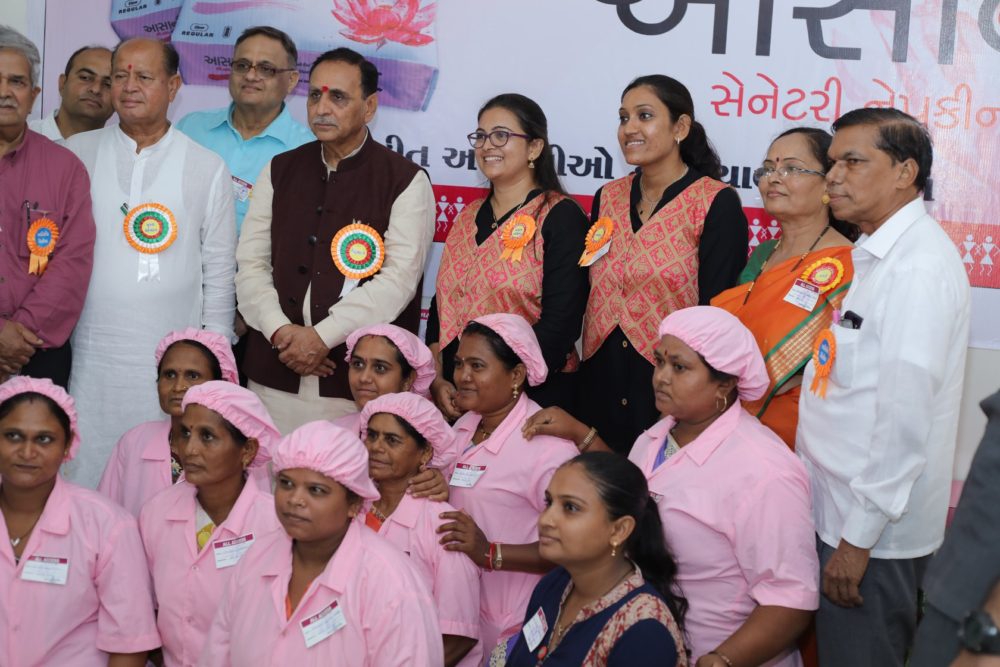 UNTDI, Gujarat- Gujarat Chief Minister Vijay Rupani inaugurated the SWACHH machine and the brand-new Atal Tinkering Lab at the Desai Foundation’s Shantaben Vidhyabhavan community center. This marks the first ever visit by a Chief Minister to the village of Untdi. Following Prime Minister Narendra Modi’s call of ‘SabkaSaath, SabkaVikas’, Chief Minister Rupani has given priority to inclusive development, with a focus on welfare of all sections of the society.

The first inauguration upon his arrival in Untdi was for the SWACCH machine – a first of its kind semi- automatic machine to produce sanitary napkins. This new machine is being used for the Desai Foundation’s Asani Sanitary Napkin Program, which 1) employs rural women to produce and sell sanitary napkins in their communities, 2) educates women & girls about menstrual hygiene, and 3) spreads a message that de-stigmatizes periods. In Untdi alone, many women are already employed in production, which means these women have access to a safe, reliable, comfortable jobs—something out of reach for most. The Desai Foundation’s Sanitary Napkin Program currently operates in two regions, and is expanding to seven more in south Gujarat.

“Women will never be left behind, society and the government need to pay attention to women’s health, and to improve the health of girls and women. Sanitary napkins have to be a part of their life. It is a big thing that women themselves produce and sell sanitary napkins through the Desai Foundation’s Asani program,” said Chief Minister Rupani.

This new machine will allow the quality of the Asani pads to be better than ever and will increase production speed to 16 pads per minute. Compared to older sanitary napkin machines, the SWACCH machine has a streamlined assembly-line production process, where one machine performs all functions versus many different production stations. With more efficient production, the Asani Sanitary Napkin Program will now be able to scale up its sales and distribution team while maintaining the price of its pads.

“It’s bringing girls together, making them a part of a community, and getting them to talk about things they are constantly told they cannot talk about,” said Megha Desai president of the Desai Foundation. “That’s why I think this truly can cultivate dignity for women in rural India.”

The Chief Minister also inaugurated the Atal Tinkering Lab at the Lok Vidyalaya School at Shantaben Vidhyabhavan. The school is now one of 2,441 in India to have been selected to receive a granted Atal Tinkering Lab, funded by Atal Innovation Mission, an endeavor by NITI (National Institution for Transforming India) Aayog to foster innovation and entrepreneurship in schools, colleges and society at large through various initiatives. Atal Tinkering Labs are a work space where young minds can explore their ideas through hands on, do-it-yourself learning. Young children get a chance to work with tools and equipment to understand the concepts of STEM (Science, Technology, Engineering and Math).

Chief Minister Rupani lauded the new Atal Tinkering Lab by saying, “Children are free to experiment with whatever thought that comes to their minds. They will have the opportunity to try something new. Today they’ll crack it, tomorrow they will break it, and the day after that they will have the foundation. Then, they will discover something new, which will be an important contribution to humankind.”

It’s important to note that on this official visit, Chief Minister Rupani was led and hosted by two women: Ms. Mittal Gohil, India Director, and Mrs. Yati Desai, Special Projects Manager, of the Desai Foundation. The Foundation spreads its mission of empowering women not only in its programs, but in its leadership, as well. It is an immense honor for the Desai Foundation to have had Chief Minister Rupani inaugurate two important additions to the Shantaben Vidhyabhavan community center.

With a vision to ‘Cultivate one million children in India as Neoteric Innovators’, Atal Innovation Mission is establishing Atal Tinkering Laboratories (ATLs) in schools across India. The objective of this scheme is to foster curiosity, creativity and imagination in young minds; and inculcate skills such as design mindset, computational thinking, adaptive learning, physical computing etc. Atal Innovation Mission is NITI (National Institution for Transforming India) Aayog’s endeavor to foster innovation and entrepreneurship in schools, colleges and society at large through various initiatives.

The Desai Foundation’s Asani Sanitary Napkin Program trains women in rural Gujarat, India to manufacture, distribute, and sell high quality, low cost sanitary napkins throughout their communities. The Desai Foundation also educates women and young girls about menstrual health hygiene, and holds gynecological health camps in the villages it serves. The women who’ve gone through the programs are better equipped to manage their health, and their confidence has boosted.

The Desai Foundation is a nonprofit organization that elevates health and livelihood for women and children in the U.S. and India through grassroots community programming. The Desai Foundation implements health, education and vocational programs that align with the existing strengths and resources of communities. Some of Desai Foundation’s programs include hygiene training, vocational training, computer literacy classes, a science school, health camps, and the Asani Sanitary Napkin Program.

The Desai Foundation has already impacted the lives of more than 387,000 women and children in the U.S. and India.