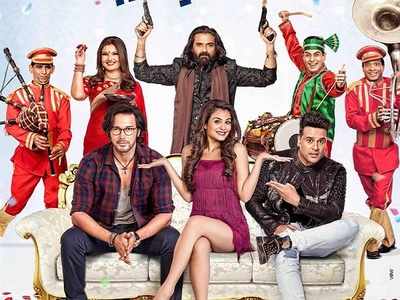 With a title like “Teri Bhabhi Hai Pagle” one expects a comedy of gentle reminders and risque situations. If astutely mounted, it sure would have been a laughter riot. But alas, this film is far from the designed potentials.

Tackily mounted, the plot revolves around a promising filmmaker Dev D (Rajneish Duggall) who is anguished while making his debut film.

Unintentionally, Dev’s girlfriend Ragini (Nazia Hussain), an actress, is roped into his maiden project which is produced by actor-producer Raj Chopra (Krushna Abhishek). From the very start, Raj lusts for Ragini and so he plans a shooting schedule in Goa.

In Goa, the film unit lands in trouble with the local police for lack of permission. Raj calls his financier, the underworld don – Aru Bhai (Mukul Dev) to bail him out. Aru arrives in Goa with his entourage. And, on noticing Ragini he tries to catch her attention.

How Dev and Ragini tackle the two men who are showering unwarranted attention on Ragini, forms the crux of the tale.

Half an hour into viewing, one notices the plot diving to its nadir till it reaches a point of no hope. What starts off as a comedy, inadvertently translates into a social cause film with messages against film piracy. The intended laughs, all along the middle stretch of repetitive situations, end on a note of embarrassment and its denouement is a thread of preachy litany. It is the amateurish writing and mediocre direction that lets this film down.

The cast, comprising actors seen mostly on television, tries to keep the film afloat with their over-the-top performances. While Nazia Hussain and Rajneish Duggal are sincere in their delivery, Krushna looks jaded performing in his usual demeanour.

Mukul Dev tries to underplay his character of the don and he does it well. Deepshika as his wife Sulochana tries to give a variant to the stereotyped character she plays and she excels.

Comedians Sunil Pal and Khayali Ram, as Raj’s handy-men Nawab and Sunder, are an extension of themselves. Vinit Sharma as the Inspector and Aman Verma as Guddu Rangela, are wasted in miniscule roles.

Overall, the irony of “Teri Bhabhi Hai Pagle” is that it fails as a satire on a film that fails, by failing itself. (IANS)