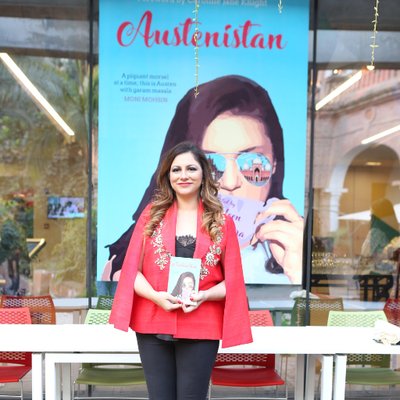 Great authors are not those who continue to resonate far beyond their own time and space but who provide a special kinship, a solace in times of personal upheavals. As Jane Austen proved for this Pakistani author, who grew up with her, made her works the focus of her studies and found in them a haven from life’s turbulence — though sometimes resenting their endings.

While Laaleen Sukhera repaid her debt with “Austenistan”, her curated anthology of six Pakistani (including her) and one Sri Lankan writers’ takes on Austen’s iconic works, mostly “Pride and Prejudice”, she also believes that the celebrated novelist remains a relevant model for today’s society through both her work and her life.

In a free-wheeling interview to IANS over social media on various aspects of Austen, Laaleen says she grew up identifying with a wide gamut of her characters — Lizzie Bennet of “Pride and Prejudice” for her “joy in the ridiculous”, Catherine Morland of “Northanger Abbey” for “naivete”, Marianne Dashwood’s (“Sense and Sensibility”) “romanticism” — and even based her Screen Studies thesis at Clark University on the author. But what cemented the bond was more personal.

“My relationship with Austen took a more intense turn in the last decade when my personal life — my marriage — became a living nightmare. At times, I sought refuge in Austen’s world where I knew all would turn out for the best, turning to Jane as one would to an old, trusted friend.

“At other times, I couldn’t bear to read about her characters’ happy endings when I’d been denied one of my own,” she says.

It was then the Lahore-based Laaleen founded The Jane Austen Society of Pakistan to create a “wonderfully eccentric little world to escape to with like-minded friends”. “Austenistan” was the outcome.

“Curating, writing, and editing ‘Austenistan’ was the one thing that kept me going through one of the most harrowing ordeals of my life. The book was published (by Bloomsbury India) when I was separated and fighting for custody of my young daughters.”

While the work was “challenging”, especially in keeping “stories short enough for a commercial fiction format” by “ruthlessly guillotining so many intriguing scenes and gripping details”, the “most heartbreaking” was that all stories received couldn’t be published.

But Laaleen also notes that “relating Austen to Pakistan doesn’t require much imagination”.

Of the stories written by a mix of journalists, a lawyer, an economist and even a scientist, Mahlia S. Lone’s “The Fabulous Banker Boys”, Saniyya Gauhar’s superlative “The Mughal Empire”, Sonya Rehman’s “Only the Deepest Love”, Gayathri Warnasuriya’s “The Autumn Ball” — which even works in a ball scene — and Laaleen’s own “On the Verge” — which transports the action back to an English manor — are all inspired from “Pride and Prejudice”.

However, Mishayl Naek’s “Emaan Ever After” is based on “Emma” and Nida Elley’s “Begum Saira Returns” on “Lady Susan”.

Romance and (suitable) marriages apart, Laaleen, citing her own case, says Austen still remains relevant, for the situation she described nearly two centuries ago hasn’t changed much. “Appearance is still everything, reputation is integral to making a good match, old money trumps new money, and life still revolves around marriages and weddings.

“Marital strife is meant to be stifled and couples’ PDA on social media is the PR-savvy route to preserving the enviable veneer of the marriage ‘brand’,” she says.

With racism, misogyny, and social inequalities, which were the norm then, still around, Laaleen hopes her effort also replicates Austen, who was very sympathetic to women’s plight, and adept in “covertly” working in social realities and feminist themes “between the layers of romance, humour, and cutting social commentary”.

“Our anthology, I hope, somewhat does the same. Tongue-in-cheek is far more attractive to me than writing that appears dreadfully in earnest.”

And then Laaleen notes, Austen herself “chose to remain single rather than marry for convenience, and helped support her family with her novels. I find that in our part of the world, women who lack financial emancipation will forever be at the mercy of their husbands and families, something that our Regency-era contemporaries can heartily agree with.”

Her effort is also aimed at fixing Pakistan’s perceived image. “Along the way, people have forgotten that we have a sense of humour here, have a strong sense of hospitality, and a fascinating heritage. I hope ‘Austenistan’ and my future work dispels some of the more outdated and one-dimensional stereotypes…”

“In Pakistan, there’s a misconception that many people don’t like to read. Well, if that’s the case, why did our book get pirated here in its first month? That’s both alarming as well as flattering!”

On future plans for “Austenistan”, she says she would “love it to be translated into multiple languages, to be adapted for the screen, and to possibly inspire a merchandise collection”.

And while Laaleen cherishes India, the “first publishing home of ‘Austenistan'” and full of “many wonderful readers and well-wishers”, she hopes “visas were a little easier so we could share so much more”. (IANS)