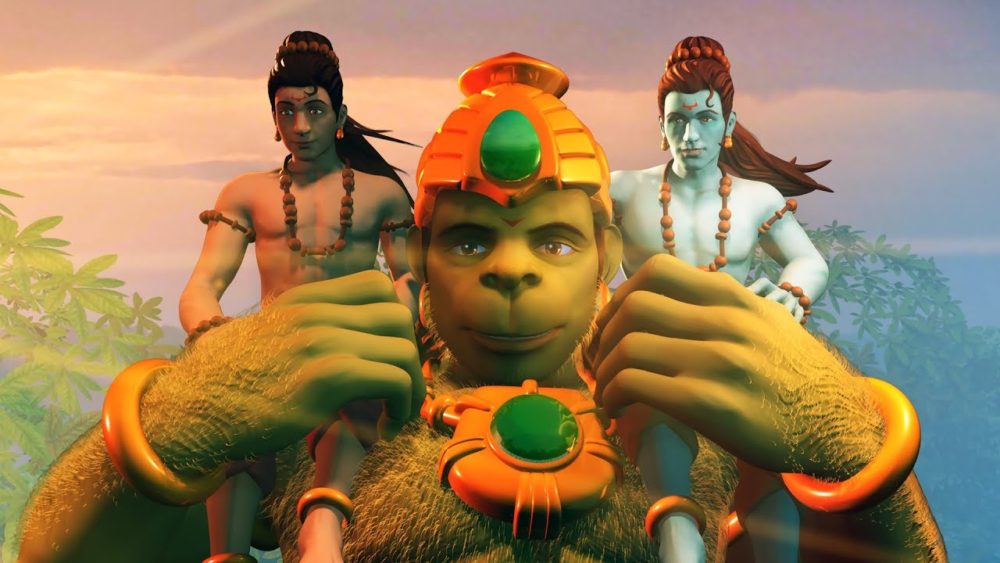 There have been numerous stories that glorify Hanuman’s devotion and love for Lord Rama. In fact there is an image that has Lord Rama and his brother Lakshman seated on Hanuman’s shoulders. This image originates from this story, which among the few, is one of the untold stories from the Ramayan.

And as the title suggests, this animated film is about Hanuman’s confrontation with Mahiravana, the son of sage Vishrava and and the brother of Ravana, the king of Lanka.

The screenplay by Narayanan Vaidyanatan, sticks to the source material, which is according to the scriptures. During the battle between Lord Ram and Ravana, when Ravana’s son Indrajit is killed, Ravana summons his brother Mahiravana to wreak havoc over Ram’s army. Mahiravana, a sorcerer and King of Patala or the netherworld, promises to help.

Ram and his entourage are wary that some mishap can take place on a particular fateful night that could bring harm to Ram and Lakshman. Hanuman is put on guard to ensure that no one enters the enclosure where the two brothers are relaxing.

Mahiravana makes many attempts and is unsuccessful. Then finally, Mahiravana enters the enclosure disguised as Ram’s ally Vibhishan and kidnaps the sleeping duo.

When the real Vibhishan comes to visit Ram, Hanuman realises what happened, torn with guilt and grief and on the advice of Vibhishan, he sets out to Patala to rescue Ram and Lakshman before Mahiravan sacrifices them. How Hanuman enters the netherworld and rescues the brothers from the clutches of Mahiravan, forms the crux of the tale.

While the story is interesting, the plot with Hanuman’s antics drags in parts and this gets tedious for a while.

Technically, the film is astutely mounted and rendered in Hindi, Tamil, Telugu and English with ace voice artistes that lend their voices and bring the characters to life. This review is based on the Hindi version.

The animation and 3D effects of the film certainly match international standards. Each frame is intricate and beautifully designed, but the colour palette is subdued, stark and not very appealing. The music and background score elevates the viewing experience.

Overall, with an onslaught of brilliant, racy and colourful animation films from international markets, this film may not hold the attention and fascinate young minds. (IANS)