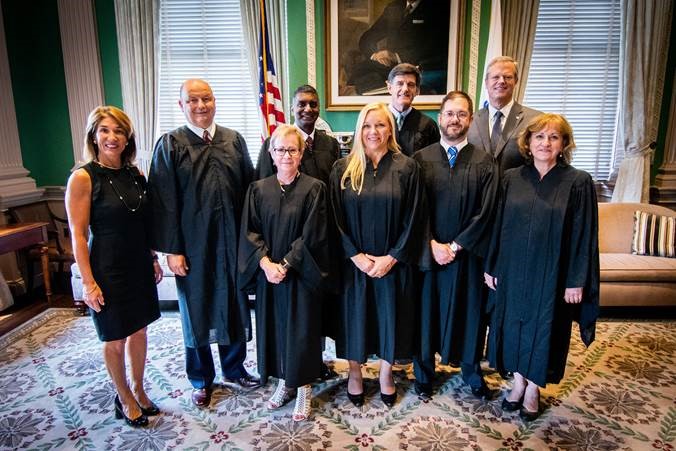 BOSTON – Massachusetts Governor Charlie Baker ceremonially swore in five new Associate Justices to the Massachusetts Housing Court as part of the Administration’s expansion of the Court on Wednesday. They are:

“Our administration was proud to expand the Housing Court’s services to the entire Commonwealth with the addition of these five highly qualified and experienced Justices,” said Governor Charlie Baker. “These justices have each spent upwards of twenty years practicing law in Massachusetts and their experience will be instrumental during this phase of the Court’s evolution.”

“These five Justices will continue to play a vital role in shaping their respective communities ,” said Lt. Governor Karyn Polito. “Each of these remarkable individuals has demonstrated a commitment to service in Massachusetts, and it is this selfless energy and legal prowess that will make a difference to the Commonwealth’s citizens in our state’s housing sector. Governor Baker and I are thrilled to welcome these justices to their new positions.”

In the 2018 Fiscal Year budget, the Baker-Polito Administration proposed this expansion and created five new positions to establish statewide jurisdiction for the court. While parts of Eastern, Central and Western Massachusetts are currently served by the Court, this expansion brings another two million people under the Court’s jurisdiction in southern Middlesex County, Norfolk County and the Cape and Islands.  The Housing Court oversees civil and criminal actions that involve the health, safety, or welfare of homeowners or those who live in residential housing and has the resources and expertise to resolve the complicated issues affecting both landlords and tenants.

The Housing Court oversees civil and criminal actions that involve the health, safety, or welfare of homeowners or those who live in residential housing. The courts hear eviction cases, small claims cases, civil action suits, and other cases related to residential housing. Led by Chief Justice Timothy F. Sullivan, the Housing Court now has 15 confirmed judges. It has 5 divisions: Central, Eastern, Northeast, Southeast, and Western.

For more information about the Housing Court, please visit their homepage.

Judicial nominations are subject to the advice and consent of the Governor’s Council. Applicants for judicial openings are reviewed by the Judicial Nominating Commission (JNC) and recommended to the governor. Governor Baker established the JNC in February, 2015 pursuant to Executive Order 558, a non-partisan, non-political Commission composed of volunteers from a cross-section of the Commonwealth’s diverse population to screen judicial applications. Twenty-one members were later appointed to the JNC in April, 2015.

Attorney del Puerto has nearly 25 years practicing law in Massachusetts. He currently serves as Assistant Clerk Magistrate in the Housing Court Department of the Northeast Division of the Commonwealth’s Trial Court. Prior to that appointment, he practiced as a Senior Associate at Sassoon & Cymrot in Boston where he focused on commercial litigation, including the resolution of contract, business, and construction disputes, tort matters and the protection of creditors’ rights. He also served as an Associate at Gargill, Sassoon & Rudolph, where he concentrated on commercial litigation, business, corporate and immigration matters. Attorney del Puerto served as Counsel for the Chelsea Commission on Hispanic Affairs, Inc., where he also provided pro-bono work for immigration law. He is also a member of the North Shore Rugby Football Club. Attorney del Puerto earned his Bachelor of Arts from the College of the Holy Cross, and his Juris Doctorate from Northeastern University’s School of Law. He currently resides in Salem, MA.

Attorney Salvidio currently leads the Condominium Law Practice Group within the Real Estate department at Fletcher Tilton PC.  Her work covers a full spectrum of real estate related matters, with particular emphasis on residential housing law, condominium law, property management, commercial leasing and transactional work. She has over 27 years of experience in residential housing law including landlord-tenant law and the development of affordable housing. Attorney Salvidio also routinely counsels condominium associations and their managers on a wide range of matters affecting condominium communities. She also specializes in commercial and residential leasing where she negotiates, drafts and advises on residential, retail, office and industrial lease transactions and related landlord-tenant disputes. Attorney Salvidio served as Board President of Worcester Community Housing Resources, Inc., a non-profit which creates and preserves affordable housing opportunities for low to moderate income households, and is currently a member of its Property Development and Management Committee. She also served on the Housing Court Committee of the Worcester County Bar Association and was a Commissioner of the Worcester Civic Center Commission for 10 years. Attorney Salvidio received her Bachelor’s Degree cum laude in Psychology from the University of Vermont and her Juris Doctor cum laude from Suffolk University Law School where she served as an editor of the Suffolk University Law Review. She currently resides in Worcester, Massachusetts.

Attorney Sherring has 25 years of experience practicing law. Since 2001, he has been a partner in his own law firm Dakoyannis & Sherring, LLC, where he concentrates on landlord tenant and real estate related cases, personal injury claims, insurance disputes, and employment discrimination claims. Previously, he was a trial attorney at Mintz, Levin, Cohn, Ferris, Glovsky & Popeo. Attorney Sherring also has a wealth of experience representing the Commonwealth as an Assistant Attorney General, Assistant District Attorney for  the Northwestern District of Massachusetts, Massachusetts Superior Court Law Clerk and Hearing Officer for the Division of Insurance. In addition to his legal experience, he has been the Chair of the Massachusetts Continuing Legal Education Program, “Trying Your First (or next) Civil Case in the Superior Court,” and Co-Chair of the “Deposition Skills Workshop.” He serves as an ex-officio for the Massachusetts Bar Association and was formerly the Co-Chair of the Massachusetts Bar Association General Practice, Solo & Small Firm Committee. Attorney Sherring is also an Advisory Board Member of the South Asian Bar Association. He has served as the Deputy Commissioner of the State Athletic Commission and has been a frequent lecturer at Suffolk University and Curry College. Within his community, he is a current Board Member of the Westwood Community Chest, where he has also served as President and Vice President. He earned his Bachelor’s Degree from Curry College and his Juris Doctorate from Suffolk University Law School. He resides in Westwood with his family.

Attorney Michaud has been practicing law for 25 years. He is currently an attorney partner at his own practice, the Law Offices of Joseph L. Michaud, where he specializes in residential and commercial real estate transactions and landlord-tenant matters. Previously, he practiced at Sykes & Michaud, Saunders & Michaud and Ponichtera & DeNardis, where he gained exposure to both civil and criminal litigation. Attorney Michaud is also a decorated member of the United States Army, having served on active duty intermittently for the last 30 years as a Lieutenant Colonel in the Judge Advocates General Corps. He first enlisted as a Tanker in 1986, and went on to serve in both Desert Storm and Operation Noble Eagle. Attorney Michaud has earned 3 Meritorious Service Medals, 6 Army Commendations, a Joint Service Achievement Medal, a National Defense Medal, a Global War on Terrorism Medal, and an Outstanding Volunteer Medal. He also taught at various institutions over the last 20 years including Sam Houston State University, the United States Military Academy, Bristol Community College and, most recently, the Defense Institute of International Studies. Attorney Michaud continues to serve his local community as Chair of the South Coast Chamber of Commerce in New Bedford and as a Board Member of the Veterans’ Transition House. He graduated with his Bachelor’s Degree from University of Massachusetts in Amherst and received a Master’s of Arts from Sam Houston State University. He earned his Juris Doctorate from the Franklin Pierce Law Center at the University of New Hampshire. Attorney Michaud is a lifelong resident of Dartmouth, MA. In his spare time, you can find him playing bass guitar in a local band.

Attorney Bagdoian has practiced law in the Commonwealth for nearly thirty years. During the last decade, she has been a solo legal practitioner at her own law firm in Brockton, representing individuals and businesses in civil litigation matters related to housing, foreclosure, real estate, and consumer protection. She was one of the founders of the Brockton Housing Court Lawyer for the Day Program, which provides advice to unrepresented landlords and tenants, and has organized educational programming for volunteer lawyer programs in collaboration with the Southeastern Housing Court for the past nine years. Attorney Bagdoian is a member of the Steering Committee for the Tenancy Preservation Program and a Board Member of the Justice Center of Southeast MA. She frequently lectures on landlord and tenant matters for Pro-Home in Taunton. Attorney Bagdoian is a panelist for several MCLE programs in Boston about Housing Court practice and a panelist for Housing Court training for the BBA. Prior to Attorney Bagdoian’s current self-employment she was a litigator at Richardson and Tyler, an Assistant Attorney General in the Trial Division of the Massachusetts Attorney General’s Office, an Associate Attorney with Ardiff & Morse in Danvers, an Associate Attorney with Choate, Hall & Stewart in Boston and a solo practitioner in Middleton. She graduated with her Bachelor’s Degree from Wheaton College in Norton, MA and received her Juris Doctorate from Boston University School of Law. She resides in Westborough with her husband, Paul Sangree.