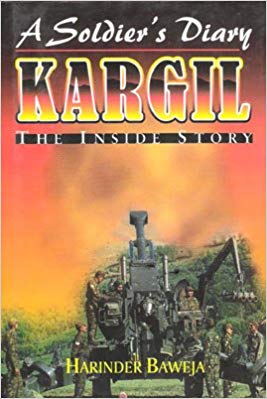 (Editor’s note: A revised edition of “A Soldier’s Diary: Kargil, The Inside Story” by Harinder Baweja is being published on the occasion of Kargil Diwas. Presented below is an exclusive excerpt from the new foreword by G.L. Batra, father of Capt. Vikram Batra, recipient of the Param Vir Chakra, India’s highest gallantry award.)

By G.L. Batra
At 1 p.m. on 5 July 1999, our troops captured Point 4875. But the enemy continued to fire from a position north of the point. It became evident that this post had to be conquered. A strong contingent of enemy troops could be seen on a long and narrow ledge running north of Point 4875. To secure our position, it was necessary to clear the ledge.

The battle continued the entire day. On 6 July 1999, it was reported that our troops could not sustain firefighting of such intensity without reinforcements. The reinforcements were immediately brought up. A fresh wave of enthusiasm coursed through the exhausted troops at the top. Through interception of the radio frequencies, the enemy got wind of Vikram’s presence. Once again they threatened him on his radio, “Sher Shah, upar toh aa gaye ho, lekin wapis nahi jane denge; Inshallah, upar hi bhej denge” (Sher Shah, you have come this far, but you will not go back alive. Inshallah, we’ll kill you). An undaunted Vikram replied, “Upar toh tumhe aur tumhare sathion ko jana hoga” (It is you and your companions who will be killed).

On 6-7 July, Vikram volunteered to head a party and reach this ledge even though he was unwell. Due to high fever and fatigue, his eyes were red as he sat wrapped in a blanket. Looking at Vikram’s condition, his commanding officer hesitated to send him to the battlefront, but Vikram insisted. Motivated by Vikram’s offer, many soldiers volunteered to accompany him. Vikram and the soldiers began their arduous trek. From eyewitnesses, I heard later that, while still at the task, somewhere along the climb, suddenly Vikram’s face changed. The signs of fatigue and fever vanished. He became a man fired by a mission.

The chilling winds of Mushkoh Valley penetrated the bones of our soldiers. It was pitch-dark. The climb was almost vertical. To make matters worse, it began to snow. Vikram continued to move like a snow leopard. He coaxed and encouraged his exhausted troops to press on. Then he heard the rat-a-tat of a machine gun, which had pinned down his troops. Vikram swiftly moved towards the firing gun by hiding behind a rock and then ran to the shelter of the next, till he reached close to the gun, lobbed a hand grenade, and destroyed it. He then asked his troops to follow him. They advanced to the next position since the enemy guns had to be silenced before daylight.

Vikram moved ahead, firing constantly with his AK-47. Fearlessly, he closed in on the enemy. It was a fight at such close quarters that he could no longer use his rifle. He pulled out his bayonet and charged at the enemy. He grappled with a Pakistani soldier, floored him with a punch on the nose, and plunged his bayonet into him. Another intruder attacked him from behind. Vikram threw him off his back and pierced him with his bayonet. A machine gun was firing from the ledge. Vikram jumped inside the ledge, where two soldiers were feeding the gun and another was firing it. A junior officer of the Pakistani Army was supervising them. Vikram leaped inside and single-handedly killed all five of them. However, he was outnumbered and was shot at close range.

Vikram, with another young officer, Anuj Nayyar, fought off the enemy’s counter-attack ferociously. They cleared all the enemy bunkers, encouraged their men to go forward, engaged in hand-to-hand combat, and forced the Pakistanis to retreat. On 7 July, the mission was almost over, when Vikram ran out of his bunker to rescue another officer, Lt Naveen Anaberu, whose legs had been severely injured in an explosion.

The subedar of his battalion begged him not to leave and offered to go instead. But Vikram famously told him, “Tu baal-bachchedar hai, hat ja peech” (You have a wife and children, step aside). He lunged forward to save the young Lt Naveen Anaberu. As Vikram was dragging Naveen towards cover, the gravely wounded officer pleaded with Vikram to let him continue the fight. Just then a bullet pierced through Vikram’s chest. Vikram was martyred, but he managed to save the life of Lt Naveen.

Enraged by Vikram’s death, the soldiers of the 13 JAK Rifles pursued the enemy. A soldier from the battalion told Gaurav Sawant, a TV correspondent: “Nobody was bothered about the bullets flying in any direction. There was only one thing on everybody’s mind: To avenge Capt Batra’s death.” Those who survived later reported that Vikram died with the words “Jai Mata Ki” (Victory to Mother Durga) on his lips.

Unnerved by the fury of the attack, the Pakistanis fell back. The Indian soldiers gained the upper hand. Captain Batra’s sacrifice paved the way for the success of our troops and the consolidation of the Indian hold on Point 4875…

By the morning of 8 July 1999, India had won Point 4875 but lost Capt Vikram Batra. With the conquest of Point 4875, the connectivity to Ladakh was secured and our vehicles could move freely on the Srinagar-Leh Highway.

The day his body was brought home, it was excruciating. With tears coursing down her cheeks, my wife said, “No parent can see the dead body of their young son. Our son had captured three peaks, he had taken the nation by storm, but suddenly he was no more. Yet, when God gives you a mortal blow, he gives you the strength to cope with the grief. Guru Gobind Singh sacrificed four sons for the country. Maybe there was some reason that God gave me twins — one had been marked for the country and one for me.”

When one of Vikram’s friends had told him to be careful since war had begun, he had replied, “Don’t worry. I will either come back after raising the Indian flag in victory or return wrapped in it.” Vikram fulfilled both his assertions. He raised India’s victorious tricolour at the height of 17,000 feet when he captured Point 5140. Later, when he fell fighting for the country at Point 4875, his body was brought back home wrapped in our national flag. Such was the bravery and patriotism of our son Vikram.

Point 4875 has been renamed “Captain Batra Top”, and the transit camp in Drass where weary soldiers break their journey has come to be known as Capt Batra Transit Camp. Capt Anuj Nayyar was awarded the Maha Vir Chakra, the second-highest military decoration, for bravery. For his sustained display of conspicuous leadership of the highest order in the face of adversity, Vikram was posthumously awarded India’s highest military decoration, the Param Vir Chakra.

(G.L. Batra is the father of late Capt Vikram Batra. Extracted from the revised edition of “A Soldier’s Diary: Kargil, The Inside Story” by Harinder Baweja, with permission from Roli Books)