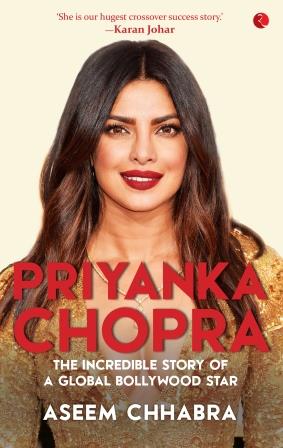 New Delhi– A British film festival programmer once asked Aseem Chhabra, known for penning the biography of Shashi Kapoor, whether actress Priyanka Chopra deserved a book. The answer has now arrived at the bookstores in the form of a full fledged biography that Chhabra has penned on the “Quantico” star, narrating her inspirational rise from a small town, middle-class family to the hearts of hundreds of thousands of her fans.

“Priyanka Chopra: The Incredible Story of A Global Bollywood Star” (Rupa/Rs 500/ 237 pages), revolves around what the title lays forth — a global Bollywood star. In doing so, Chhabra, who has been published widely on cinema-related themes, provides a background to Chopra’s life, narrating the simple life she lived before becoming an international phenomenon.

The biographer deserves both praise and scrutiny for venturing into a subject that could be as challenging as the one at hand. For starters, Chopra’s is a life in progress and therefore, any extra speculations and personal observations on her life by the author, could be both misleading as well as far from reality.

To make matters worse, the actress has not collaborated with the biographer on this project as he himself admits: “Priyanka did not collaborate with me in writing this book. I wish that had happened and believe me, I did try, but there are things beyond my control.”

The things beyond control, at least one of them, have now surfaced as Chopra is herself penning her memoir, which will be published by Penguin Random House next year as “Unfinished”.

This book, therefore, is of utter significance if one wishes to get a ringside view on Chopra’s journey, because it is not being told by the subject, rather it takes into consideration what others have to say about her. By quoting people like Zoya Akhtar, Anurag Basu, Dia Mirza, Rohan Sippy, Prakash Jha and others directly from their interviews with him, Chhabra manages to portray how these respective people, who have been close to the actress, view her journey.

The book gives one an opportunity to know about an Indian actress’ rise to fame in Hollywood, where several reputed Indian film personalities tried their luck but returned to their comfort zone in Bollywood. But for most of it, there is hardly anything new that the book presents. The people that Chhabra quotes in his book are not saying anything unprecedented or anything that is not already in the public domain.

The book has tricky praise on the front cover by filmmaker Karan Johar: “She is our hugest crossover success story.”

The publisher could have done with a quote on the merit of this biography rather than a quote on the actress, especially when it is used on the front cover as a tool to boost its sales.

Also, for the 196-page text on the actress, the biographer has quoted, or referred to as many as 237 interviews, articles and press releases on or by the subject. Therefore, for most of its part, the biography is a combination of the readily-available material on Chopra.

Nonetheless, it is worth an inclined reader’s time, particularly in the view that the author did not enjoy the subject’s support and yet managed to flesh out this offering.

And since it comes before Chopra’s own memoir, there is room for readers to know the actress from her birth to the stage where she is now — before she sets the record straight in 2019 in : “Unfinished”. (IANS)