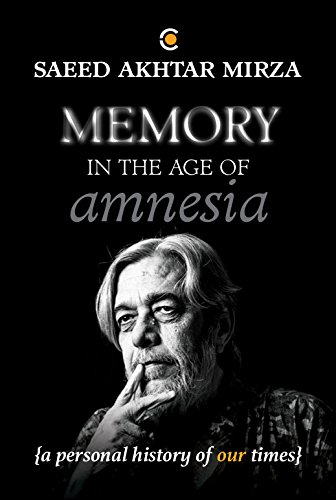 New Delhi– He has been called an angry radical, an anarchist and a lot of other things but multiple award-winning director of films, documentaries and television serials, Saeed Akhtar Mirza is, in his own words, a leftist Sufi. His third book, billed as “a personal history of our times”, bears this out.

“Memory in the Age of Amnesia” (Westland/222 pages/Rs 499) opens with an essay titled “The Gujarat Legacy”, in which Mirza lashes out at Prime Minister Narendra Modi — without naming him — and sets out to remind his readers of the “scar” that, although permanent, seems to have been overlooked.

“A man has been installed as the Prime Minister of my country,” Mirza writes in the opening chapter of the 222-page book, “who represents a political and ideological mindset that I oppose and find deeply disturbing.”

“His contentious and questionable journey to the pinnacle of power has been documented thoroughly and no amount of wizardry of words and convoluted arguments by admiring political pundits and fans and his own, personal amnesia of what he did to arrive at where he is, can erase that history. The scar is permanent,” the 74-year-old notes.

Mirza, who divides his time between Mumbai and Goa, nonetheless recognises the fact that Modi “was democratically elected by the people of our country”.

But, Mirza reflects, he swept to power with “such a force that any semblance of a credible opposition has almost completely vanished”.

“His invincibility — backed by a money-and-media juggernaut — has since then been at times upstaged and has even faltered in some crucial elections,” he writes.

But this book is not just about Mirza’s observations on the current state of affairs; it is rather a recollection of memories that he has lived with and that have shaped his life.

“The painful conclusion that I draw from his victory was that for the people of India, at least to the 31 per cent who voted for him vehemently, his background didn’t matter. For them it was simple: What happened, happened (in Gujarat in 2002).

“The country had to move on and there was no future in looking over one’s shoulder at the past. For these people, it was a memory erased or overlooked,” Mirza writes.

He then goes on to express his shock over those who did not vote for “this demagogue” and asks why couldn’t they see the avalanche coming.

But four years have rolled by since Modi assumed office as the Prime Minister. What is it that Mirza is trying to get at?

In what he calls an attempt to “jog our collective memories”, Mirza travels down memory lane to the time when India became a Republic with a written constitution and our founding fathers defined the nation to the people of India and to the world.

From here, Mirza moves to “the slow dismantling of the institutions” that, according to him, began within 15 years of our Independence.

“What followed for the next 30 years were a series of manufactured riots and conflagrations that left the nation reeling,” he notes.

He then trains his guns at the Congress party, which was the dominant party in the initial years of independence when “the seeds of long-term disaster” were sown. Accusing the Congress of harnessing “quite a few right-wing warlords”, Mirza contends that it was their “greed for short-term gains” that has led the country to where it is now.

But is he just imagining these things, another conspiracy theory?

“I don’t think so. I believe we are living in a world where the present looms so disconcertingly large it leaves us little time for reflection. It seems our memory span is getting shorter and what fills our information matrices so often is meaningless trivia,” he asserts in the book. (IANS)