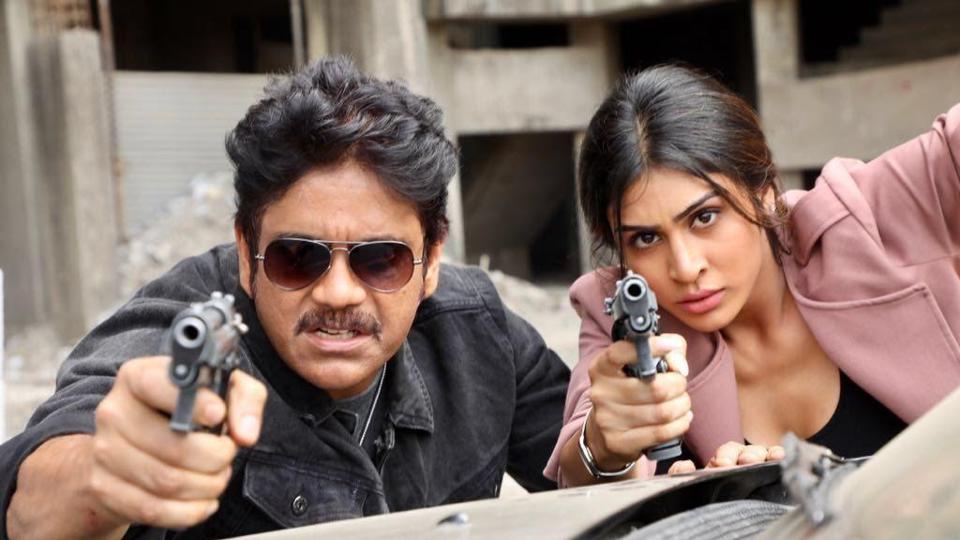 It’s in the effortless casual arrogant way that Nagarjuna strides across the screen that we get to feel the nervous energy of a restless incorruptible larger-than-life cop, who must somehow stop a corrupt senior colleague from wreaking gangsterism in Mumbai.

Yes, RGV is back to his patented haunt: the underworld.

Except that this one is less brutal, gentler and calmer than his other recent crime thrillers where the junior artistes look as if they have not bathed for a month. Here the scum-gang is tempered and toned-down. But the background music pounds so hard you fear for your temple.

But let us count the blessings. There are no gruesome mob-mayhem sequences in “Officer”. For the first time since “Satya”, Ramu attempts to invest emotions into his characters.

Even the soft-corner that our hero has for a female colleague (Myra Sareen) appears fudged. The narrative has no time to develop feelings, as it quickly moves to the next shoot-out.

The violence in “Officer” is far more controlled and clenched than what we have seen in Varma’s other post-Satya films. One shoot-out where the antagonist pretending to be leading a gang-raid shoots down his own colleague, is chilling.

Ironically, the arch-villain in “Officer” is a senior cop Pasari (played by Anwar Khan). The systematic breakdown of the law and its arrogant subversion and manipulation by this devious villain is recorded with a chilling directness often marred by camera angles which favour inanimate objects over the human characters.

Violence is always shown to be shockingly casual in Varma’s crime world. Here a shoot-out in an amusement park shows victims being mowed down as Nagarjuna (Shivaji) runs helter-skelter with his frightened girl.

The daughter is often put into hugely hazardous situations. The end-violence on a building rooftop has the petrified girl watching her father and the villain fighting to a bloodied end with hammers, shovels, bricks and anything they can lay their hands on.

Perhaps this is Ramu’s way of telling us that impressionable minds cannot be exempted from the vitiated atmosphere we live in. The statement on the police-underworld nexus could have been tighter edited and allowed to breathe rather than pant and heave.

A birthday song featuring Nagarjuna and his colleagues finds the camera acting more drunk than the characters.