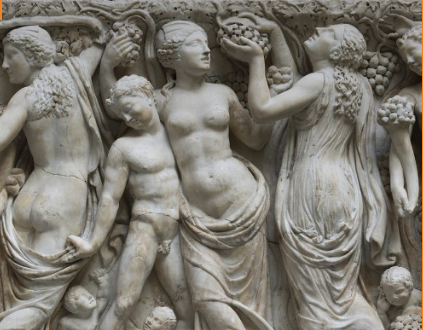 BOSTON– A daring new exhibition, Life, Death & Revelry, takes a close look at one of the Isabella Stewart Gardner Museum’s most treasured works, the Farnese Sarcophagus,  widely considered the most important ancient Roman sarcophagus in America. This immersive installation explores the piece’s history, including new scholarship, and features a new artwork inspired by the Sarcophagus, a 3D digital projection by Artists-in-Residence Paul Kaiser and Marc Downie of OpenEndedGroup.

“This exhibition traces this artwork’s journey from ancient Rome to nineteenth-century New England, and allows us to place it in conversation with a contemporary new media artwork,” said Dr. Christina Nielsen, the William and Lia Poorvu Curator of the Collection. “In this way, we follow the lead of Isabella Stewart Gardner whose dynamic gallery installations allowed works of art to speak to each other across time and place.”

The four-sided intricately carved marble object with its glorious images of cavorting satyrs and maenads is a masterwork of classical art. Created by Roman sculptors around 225 AD, the Farnese Sarcophagus was originally used as a coffin. Prior to Isabella Stewart Gardner’s purchase of the Sarcophagus in 1898, it changed hands over thousands of years, inspiring generations of artists, collectors, conservators, and viewers.

“Special exhibitions allow us to see works in the Museum’s collection in a new light,” said Peggy Fogelman, the Museum’s Norma Jean Calderwood Director. “We will not only be able to dive deep into the rich history behind the Farnese Sarcophagus and the universal themes it engages, but also be inspired by the current day interpretations of living artists.”

For Life, Death & Revelry, the monumental 7,500-pound object is being carefully restored and rigorously studied by the Museum’s conservation team and will be, for the first time in more than 100 years, temporarily moved from its usual place between columns in the Palace courtyard into Hostetter Gallery, so that it can be viewed from all four sides. As part of the exhibition, new artistic, scholarly, and scientific discoveries will be presented about the sarcophagus’ original colorful appearance and the restoration campaigns it has undergone in the last few centuries.

Among those discoveries is the identification of Egyptian blue, thought to be the first man-made pigment. Other pigments found include pink, orange, purple, and red, as well as gilding, proving that this object was once a colorful work of art. Once thought to have originated in Greece, testing indicates that the marble was likely from a quarry site in western Turkey, where it was excavated and possibly carved in a nearby workshop, then transported to Rome.

Over a period of many months and repeated residencies at the Gardner, artists Paul Kaiser and Marc Downie, of the OpenEndedGroup, carried out an intensive photographic study of the sarcophagus, which they analyzed using their own custom-designed software platform, transforming the data into a 3D projection installation called “Maenads & Satyrs.” The 3D projection combines non-photorealistic 3D renderings, body movements by motion-capture, and the autonomy of artworks directed or assisted by artificial intelligence. Kaiser and Downie often use film, motion capture, photography, drawing, music, and architecture for their work. The soundtrack is a specially commissioned recording of cellist Yeesun Kim performing Kaija Saariaho’s musical composition, “Petals,” for solo cello and electronics.

As part of their multi-disciplinary approach, Kaiser and Downie have worked in dance with well-known choreographers Merce Cunningham, Bill T. Jones, Trisha Brown, and Wayne McGregor. Their work has been presented at Lincoln Center, the New York Film Festival, Barbican Center, ICA Boston, the Hayward Gallery, the Berlin Film Festival, Sadler’s Wells, the Sundance Film Festival, the Detroit Institute of Art, the Rome Film Festival, MIT Media Lab, the Museum of the Moving Image, Mass MOCA, ICA London, and other venues. The Museum of Modern Art has eight of their 3D films in its permanent collection. They have also received numerous prizes including a Guggenheim Fellowship, the John Cage Award from the Foundation of Contemporary Arts, and a Rockefeller Foundation Media Arts Fellowship.

Visitors will be able to find their own personal meaning in this timeless work as part of the exhibition’s multi-disciplinary programming of dance, music, and other performances that draw on the object’s universal themes of life, death, and merriment.

“From the time that Isabella opened the Museum, the incredible works in the collection have inspired artists,” said Pieranna Cavalchini, the Tom and Lisa Blumenthal Curator of Contemporary Art. “John Singer Sargent, among others, used one of our galleries as a painting studio from time to time, and it is in that spirit of supporting artists that we continue her legacy with our current Artist-in-Residence program. As this exhibition shows, a work that is 2,000 years old can be pivotal to the creative life of our artistic community.”