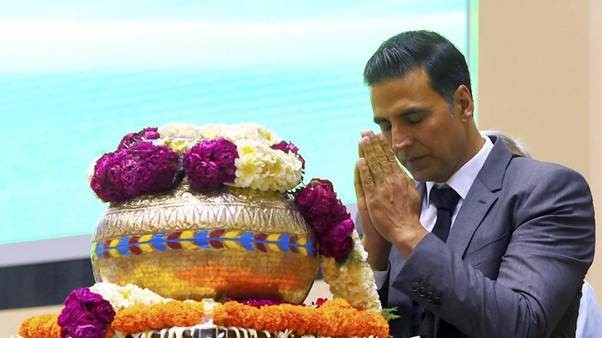 Mumbai– Riding high on the success of “Toilet – Ek Prem Katha”, actor Akshay Kumar will soon be coming out with “Toilet 2”.

“Time to get ready for the next Blockbuster — Mission #Toilet2! Iss baar badlega poora desh (The whole country will change this time)! Coming soon,” Akshay tweeted on Saturday.

The actor also shared a short video in which he said: “Toilet toh bana liya, par katha abhi bhi baaki hai. Main aa raha hun leke ‘Toilet’ part 2 bahut jald. (We made toilet, but the story is not over. I am coming soon with ‘Toilet’ part 2.”

The actor didn’t share any more detail about the project.

A movie told through the story of a woman fighting for her hygiene rights, Akshay and Bhumi Pednekar starrer “Toilet – Ek Prem Katha” is produced by Neeraj Pandey and directed by Shree Narayan Singh, who delivered a strong message with a subtle punch.

The film released in 22 countries in Europe alone and over 50 countries worlwide, garnering a welcoming response not only from the Indian diaspora but audiences internationally. Countries such as Japan and Malta also held multiple screenings of the film.

“Toilet – Ek Prem Katha” released in mainland China in Mandarin as “Toilet Hero” earlier this month in over 12,000 screens. The film debuted at the top spot in its opening week at the Chinese box office, and since June 8, it has already crossed over Rs 100 crore in the Chinese market alone.