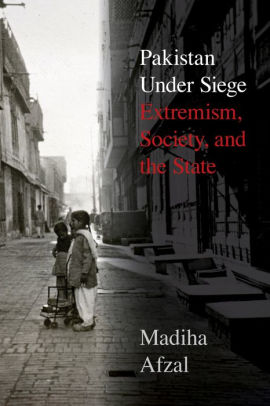 It is considered one of the world’s most dangerous countries for being a hub of a particularly virulent form of violent religious extremism, whose impact ranges far beyond the neighbourhood – and is also bleeding the nation itself. But this view of Pakistan ignores how it got to this state and how engrained is the problem among its people.

In other words, are all ordinary Pakistani extremists?

No, argues US-based Pakistani academician Madiha Afzal, and in this book, goes on to provide a reasoned, insightful and multi-facetted analysis of how most common Pakistanis think – and why.

While Pakistan is, in Western eyes, a “villainous, failing state that created a terrorism monster and does not do enough to fight it” and its citizens “thought to be irrational fundamentalists”, she says the exclusive definition of the country only from its terrorism problem, by jihadist training camps and involvement of some citizens in attacks in the West is a misleading simplification of a “more complex story”.

And since most works examining fundamentalism in the country tends to look at it from a “top-down security perspective, limited to the actions of the state with little focus on how those actions affect the ordinary Pakistani” and ignoring the historical basis of such actions, they also gives “a one-dimensional picture”, says the author.

It is these perceptions, as well as the oft-believed view that Pakistan’s travails arose from its major involvement in the campaign against the Soviets in Afghanistan, that she seeks to clarify, elaborate or refute here.

And for this purpose, Afzal, a non-resident fellow at the Brookings Institution, adjunct Associate Professor at the Johns Hopkins School of Advanced International Studies and World Bank consultant, uses a combined approach of survey data on various issues stretching from terrorism to religion, personal interviews with students, from high school to university, historical narratives of a variety of key players and her own understanding of the country’s course to show how extremism worked its inroads right from the formation of Pakistan.

As she shows, with a focus of the rhetoric and strategic choices/decisions of the three main actors – the armed forces, the politicians and the Islamist parties, the period of Gen Zia-ul-Haq was much responsible for the current malaise but the roots of the problem extend much deeper.

These, Afzal contends, arose not only in the circumstances Pakistan was born and faced, but in rather the two main concepts it chose in its national narrative – Islam and active suspicion of India (and later the West) – and accordingly spread among the people as a doctrine.

Beginning with “a (very) brief” introduction to four major militant groups – the Taliban’s Pakistani and Afghan versions, the Lashkar-e-Taiba and the Al Qaeda, and how the public perceives them, she goes on to encapsulate the people’s views on these terror outfits, as well as the US, India and Islam itself.

Subsequently, she goes to deal with the Pakistani state’s narrative on the terrorism it faces, and back to its own creation, its Afghan and Kashmir ‘jihads’, and the civil-military equation, to give a rather eye-opening idea of how the whole problem arose.

Afzal then takes then Punjab Governor Salman Taseer’s 2011 murder by his own bodyguard over his stand on blasphemy laws to go back and study the legal Islamization. This, as we come to learn, though speeded-up in the Zia years, began right from the country’s birth, and accounts for the rather uncompromisingly fundamentalist outlook among a broad swathe of its people.

Next is the educational component, especially the Pakistan Studies course, in firming up the mindset of the people, especially regarding their country and religion and its inveterate enemies (India and the US), and the contested issue of the madrassas. Afzal ends with her overall appraisal.

Apart from the heartening point that its not the people, its the state that holds responsibility for this state of affairs, she offers a hard and long, but possible, path towards redemption.

But while Afzal’s book, packed with a host of valuable, sometimes even counter-intuitive, insights about the Pakistani people is an essential contribution to understanding the country, its real worth is in identifying the mistakes – an exclusivist approach to religion, ignoring “inconvenient” history and trying to indoctrinate people – that Pakistan has committed and guard against following them. (IANS)