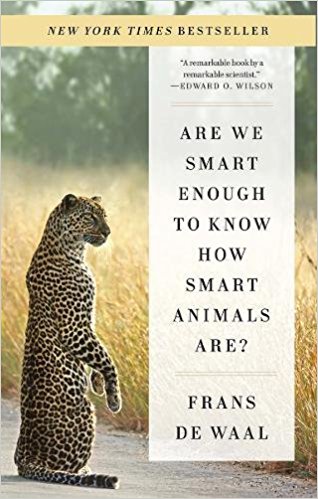 Pet lovers swear by the intelligence and empathy of their dogs, cats and other charges, many social media users spend much time chuckling over pictures of animal antics, an octopus forecast the 2010 Football World Cup result, a goat of Brexit and a monkey, a tiger and a polar bear of the Trump-Clinton presidential contest. Dumb animals still?

Animals, or rather other animals’ cognitive abilities forms the crux of a major scientific debate. Humans, on the basis of their ability to make and use tools, and exhibit a sense of identity, and of time, have been long prone to believe themselves the planet’s preeminent – and only – thinking species.

But, as this book shows, we cannot hope to retain this exclusive status, in light of increasing evidence that animals, beyond our other primate cousins, exhibit cognitive behaviour – but in their own way.

Dutch-American biologist de Waal uses a combination of zoological history, anecdotes, personal and otherwise, and scientific and philosophical challenges in the field and how they are being faced and examples – not only from apes, but also crows and parrots, dolphins, elephants, sheep, bats and even wasps to show how we have long underestimated our fellow living beings. Kafka and Wittgenstein also figure.

Beginning with his own experiences of watching a female chimpanzee transport her bedding outside and an other one taught to raise an orphan – a time-consuming affair – say goodbye to the others before heading for her “duty”, he however notes that there are still those who would question the mental capability of animals, despite the experiences and experiments of scientists studying the matter.

“Are they making a reasonable assumption or are they blinkered as to what animals are capable of? And why is humanity so prone to downplay animal intelligence? We routinely deny them capacities that we take for granted in ourselves..,” he holds.

De Waal answers his own questions by holding the inherent human bias, and belief in their exclusive superiority, which stops many from even considering the possibility. This, he contends, is the primary obstacle to overcome- as the book’s title says.

For most of the 20th century, he says, science was overly cautious on the subject, with attributing intentions and emotions to animal seen as naive, with the two dominant schools either viewing animals as either “stimulus-response machines out to obtain rewards and avoid punishment” or “robots genetically endowed with useful instincts”.

And the reason, as he shows, was a skewed playing field with the scientists seeking replications of human skills and the animals’ earlier poor performance had more to do with the way they were tested than their intelligence, as the tests did not “fit an animal’s temperament, interests, anatomy, and sensory capacities”.

De Waal goes on to cite two experiments where a slight change in circumstances made gibbons and elephants use tools to achieve their goals, before going to prove his thesis, with a mixture of stories, experiments and observations but never overdoing non-human cognition.

He focusses on “umwelt” or an organism’s self-centered, subjective world, while showing that animals are capable of cognition, or basically information processing. But stressing while cognition is the mental transformation of sensory input into knowledge about the environment and its flexible application, while intelligence “refers more to the ability to do it successfully”, he shows animals do not lack either.

His examples include Ayumu, the ape in Japan, whose photographic memory allows him to quickly tap a series of quickly-disappearing numbers on a touchscreen in the right order, though the fact “that humans cannot keep up with this young ape has upset some psychologists”, bonobo Lisala, who can not only use tools but remember when they may be needed, elephants who can recognize themselves and others, and the chimpanzees who can discern parents from a series of photos they are shown.

Also dealing with the question whether animals can be said to have “culture”, considered an exclusive attributes among humans too, while giving unheralded scientists like German Wolfgang Kohler and Russian Nadia Ladygina-Kohts who set the stage for animal cognition research their due, De Waal makes a convincing case against “dumb animals””- which, he proves, is a fairly recent phenomenon.

Will we believe him? It may be a seminal test of human intelligence! (IANS)