Speaking to INDIA New England News at the pre-concert gathering of MITHAS volunteers and supporters Thursday night, Pandit Jasraj called on Bostonians and music lovers to join the concert.

When asked what the audience should expect on Saturday, Pandit Jasraj said he does not plan what is he going to sing and present. 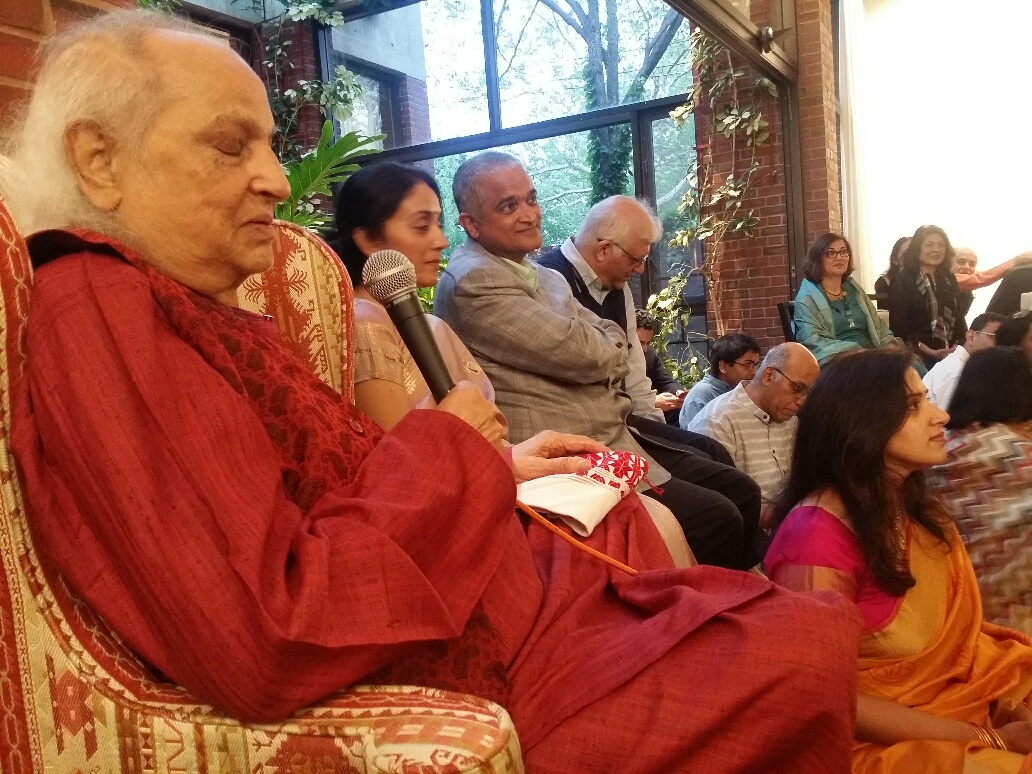 “I don’t plan and I don’t decide ahead of time what I am going to sing. If I plan something, it changes by the time I reach the venue,” said Pandit Jasraj, who had performed at Kresge Auditorium four

Many had said that Pandit Jasraj’s performance in 2014 at Kresge was one his best performances in recent years.

“The last time he performed in Boston, the auditorium applauded for 15 minutes, on its feet,” said Anuradha Palakurthi, chairwoman of the Board of Directors of MITHAS. “Prepare to be transported into a different world.”

While welcoming Pandit Jasraj, Ms. Palakurthi said that it was after listening to the legendry singer four years ago Palakurthis committed themselves to MITHAS. The Thursday event was hosted by Ms. Amala Mahadevan, who also serves as board member of MITHAS, at her residence in Cambridge.

There was a brief musical presentation by singer Trupti Mukherjee, a disciple of Pandit Jasraj. She sang several devotional songs from Haveli Sangeet: Lal Gopal, Ja Re Badra, and Sachi Kaho Manmohan Moshe.

Pandit Jasraj has rightly been called India’s best gift to the world. He created a novel form of jugalbandi called Jasrangi that is styled on the ancient system of moorchhana, between a male and a female vocalist, who each sing different ragas at the same time.

“A senior artist, such has Pandit Jasraj, has arrived; his fame and security as a topmost performer of his era is assured, and he does not need to awe his audiences with cleverness and velocity,” George Ruckert, founder of MITHAS, said in an earlier statement. “It is not the music that suffers with advancing age.  However, the wear and tear of the road on the touring musician is a daunting barrier to a senior artist’s wish to travel and concertize.  In Panditji’s case, he has done all that both in India and abroad.”

The MITHAS concert with Pandit Jasraj will be held on Saturday, May 19th at 7 pm in MIT Kresge Auditorium. More information about the concert and tickets can be found at www.mithas.org