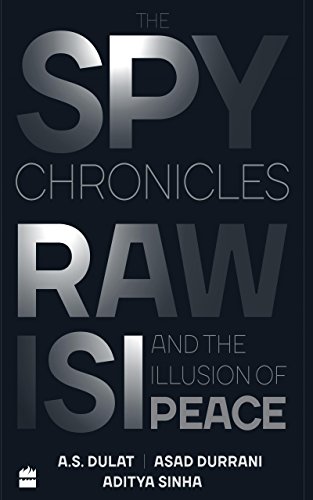 New Delhi– Theirs has been the most vicious of all relations — one was a former chief of India’s RAW and the other of Pakistan’s ISI — but their coming together in a first-of-its kind groundbreaking book of dialogues highlights that “all hope is not lost” as far as sub-continental relations are concerned.

Amarjit Singh Dulat, former Secretary of Research and Analysis Wing (1999-2000) and Asad Durrani, former Director General, Inter-Services Intelligence (1990-91), being the most unusual of counterparts as they are, could not meet in their home countries — and therefore guided by journalist Aditya Sinha (the moderator of the dialogues in the book), the conversations took place in cities like Istanbul, Bangkok and Kathmandu.

The result? Their meetings produced a total of over 1.7 lakh words and about half of these have made their way into “Spy Chronicles” (HarperCollins), scheduled to be launched here on Wednesday.

Their conversations, Sinha notes, primarily dealt with “subjects that have long haunted South Asia, flashpoints that take lives regularly.” The idea behind these dialogues was to take a deep dive into the politics of the subcontinent, “as seen through the eyes of two spymasters.”

The conversations throw light on Kashmir, and a missed opportunity for peace; Hafiz Saeed and 26/11; Kulbhushan Jadhav; surgical strikes; the deal for Osama bin Laden; how the US and Russia feature in the India-Pakistan relationship; and how terror undermines the two countries’ attempts at talks.

The book was Dulat’s idea and when the project was first mooted, Durrani laughed and said: “Even if we were to write fiction, no one would believe us.”

The former Indian spy chief refers to his Pakistani counterpart as a “friend”, noting that his straight-forwardness is striking.

“There is no bullshit; for him a spade is always a spade, which is at times disappointing for me. He has never hesitated to speak up or render help,” Dulat writes in praise of Durrani.

On the other hand, Durrani points out that he “was born an Indian – there was no Pakistan then” and goes on to recall his early days when he grew up watching Indian movies, and keenly listening to cricket commentaries on the radio.

Dulat also reveals that when Narendra Modi was preparing to take the oath of office as Prime Minister in 2014, “two notables from Srinagar” suggested that the then Pakistani Prime Minister, Nawaz Sharif be invited as “he was keen to come”. A senior Pakistani diplomat suggested against taking the risk because Sharif “might not be allowed to come to India”. Dulat then dialled Durrani, whose response was unequivocal – “there was no reason for Nawaz Sharif not to come.” The message was then passed along.

“There was excietment in government, but the bigwigs wanted an assurance that Mian Saheb would come if invited,” Dulat reveals.

In the opening chapters, the two spymasters dwell on the relveance of the book , speakign about their respective backgrounds as professional intelligence officers.

The book also mentions a particlar incident of May 2015 when Dulat and his colleagues rescued Durrani’s son Osman who was stranded in India. “The General called me six to seven times the next day, often asking the same thing….I told him… You believe in Allah and I have full faith in Waheguru, all will be well,” recalls Dulat.

And finally when Osman left Mumbai, the General called and said: “Your faith in Waheguru helped Osman.”

Dulat and Durrani also explore the universe of spying in the book; they deal with the perceptions of the ISI and compare it to the RAW.

In this context, Durrani reveals that “the ISI probably learnt about” Osama bin Laden and “he was handed over to the US according to a mutually agreed process”. Dulat maintains that the assessment from the Indian side “is the same. That he was handed over by Pakistan.”

The book further carries an interesting round of conversations on India’s current National Security Advisor Ajit Doval, whose “iron fist” attitude towards Pakistan, according to Durrani, is a result of his experience with the Indian High Commission in Islamabad in the 1980s.

“In Ajit Doval’s case it probably affected him in a way where he felt, ‘Oh God, this country must be dealt with an iron fist’,” Durrani notes. Dulat, on the other hand, describes Doval as “one of our outstanding operational guys”.

“The trouble, though, with people who are so much into themselves, is that they’re lonesome and they stay aloof. In ‘A Legacy of Spies’ there’s a relevant line that says, the trouble with spooks is that they find it difficult to invest in trust…Ajit is a guy who won’t trust anybody,” maintains Dulat.

On the issue of Kulbhushan Jadav, Dulat says that if he was “really a RAW spy, then it’s a pretty sloppy operation.”

Durrani on the other hand believes that the revealation about Jadhav must have been done to counter the Indian threat after the January 2, 2016 attack on the Pathankot air base.

“What was the threat,” asks Dukat.

“That India is looking for links between Pathankot and our establishment. So we came up with a counter-argument that we know you’ve been doing this (in Balochistan).”

However, both of them maintain that India and Pakistan should have been discreet about the matter, ensuring the exchange of spies in each other’s custody.

The book concludes with a section where both spy masters submit a roadmap for the way forward and then discus, often argue, about the points presented by each other.

The book has been published by HarperCollins but it was Chiki Sarkar, the publisher at Juggernaut Books, who suggested that it should be in a dialogue form to reach a wider audience and make it an interesting read. (IANS)