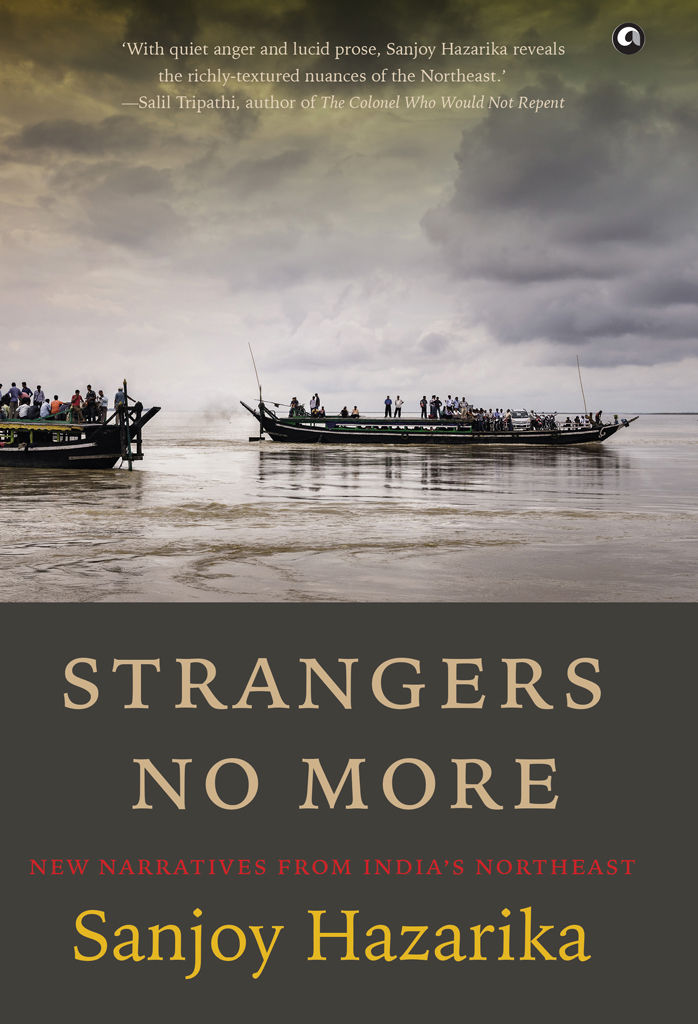 With the Union Home Ministry last month removing the draconian Armed Forces (Special Powers) Act (AFSPA) from Meghalaya and reducing it to eight police stations in Arunachal Pradesh, Commonwealth Human Rights Initiative Director and award-winning journalist Sanjoy Hazarika’s latest book, “Strangers No More”, has suddenly attained much relevance and needs to be read by anyone who cares about northeast India and protection of human rights and justice.

The book comes over two decades after Hazarika’s much-acclaimed “Strangers of the Mist” that was described as a path-breaking narrative on northeast India that put in the then-current perspective the situation and people of the “not-mainland India” region.

“Strangers No More”, as the cover introduction suggests, explains how and where things stand in the northeast today and examines old and new struggles, contemporary trends and the sweeping changes that have taken place and asks whether the people and the region are still “different” from the rest of India, to each other and whether they are destined to remain so.

A vocal opponent of the AFSPA, which gives powers to the Army and central forces deployed in “disturbed areas” to kill anyone acting in contravention of law, arrest and search any premises without a warrant and provide cover to forces from prosecution and legal suits without the Central government’s sanction, Hazarika explains why the Act “needed extensive review at the very least and repeal at the most”.

The Act is effective in the whole of Nagaland, Assam, and Manipur (excluding seven Assembly constituencies of Imphal).

In his Author’s Note, Hazarika declares that “Strangers No More” “is a deeply personal book, for it reflects what I regard as the core issues facing the eight northeastern states of India: Politics, policy, law and disorder, violent uprisings and painful reconciliations, offence and defence, conservation and oppression, history and the contemporary reality, stereotyping and breaking out of the mould, hope and despair”.

He then devotes the entire first chapter to the AFSPA and what he calls “pussillanimous failure” to follow up on the Central government-constituted Justice Jeevan Reddy Committee’s report reviewing the Act.

Hazarika starts with the 2004 killing of a young Manipuri woman, Thangjam Manorama Devi, by personnel of the Assam Rifles and the huge public outcry that followed resulting in the Indian government, for the first time in its history, deciding to review a national security law.

Recounting the Manorama Devi incident, he writes that she was a low-level courier within the pro-independence People’s Liberation Army (PLA), “but, unable to endure a tough life in rough terrain and uncertain conditions, had returned to her family”.

Following a tip-off that she had returned, a unit of the Assam Rifles that fateful night in June 2004 dragged out a “sleepy-eyed and frightened” Manorama Devi from her home and after brutally assaulting her, took her from place to place to rat out on fellow comrades in the PLA.

As dawn approached, she wanted to urinate in privacy. She was allowed to do so while being bound by one hand to a long thick rope.

Sensing that her fate was sealed anyway, Manorama Devi shook off her rope and tried to run away but a few short bursts of automatic gunfire felled her.

“Throughout India, if a detention, arrest or interrogation of a woman was being planned by government authorities, it was mandatory for a female civil, paramilitary or police officer to accompany the unit (army, police or otherwise),” writes Hazarika, alluding to the gross misuse of the AFSPA in the northeast.

He also refers to the 16-year hunger strike by “Iron Lady of Manipur” Irom Sharmila Chanu in protest against the AFSPA. At the time of the Manorama Devi incident, Sharmila was in the third year of her fast.

The part on Hazarika’s selection for the five-member Reddy Committee makes interesting reading.

“I was the fifth and the only non-government member. Also I was in a minority — the only person with an unambiguous position on AFSPA, that it needed extensive review at the very least and repeal at the most,” he writes.

The chapter is filled with the painful and heart-breaking public hearings that the committee held across the AFSPA-imposed states in the northeast.

“The fundamental right to life remains suspended where AFSPA exists today, a slap in the face of the Constitution and its upholder, the Supreme Court, as well as Parliament,” Hazarika writes in stinging criticism of the Act.

At the end of it all, when the Reddy Committee submitted its 147-page report that unambiguously recommended the repeal of the AFSPA, then Union Home Minister Shivraj Patil declined to make it public.

Hazarika recalls a conversation between columnist Siddharth Varadarajan and former National Security Advisor M.K. Narayanan wherein the latter reportedly said: “When we picked Reddy, we thought he was a ‘safe’ judge. General V. Raghavan would represent the army’s interests; Dr Nakade was a friend of the home minister and P.P. Srivastava was home ministry person. Sanjoy Hazarika was in a minority. How were we to know that he would turn everyone to his side? Now, we’re stuck with a report that we can’t implement.”

The author described Narayanan’s remark as “one of the greatest compliments I had received”.

Hazarika also writes that when he later asked Narayanan about the fate of the AFSPA, the latter was categorical: “Governments may come and governments may go, but AFSPA will remain.”

The rest of the eight chapters of “Strangers No More” look at, among others, Mizoram’s story of resistance and reconciliation, the issue of migration and discrimination in Assam, the border issues of Arunachal Pradesh, Sikkim, Meghalaya and Tripura, the much-anticipated Naga accord, and the psychological distances which still need to be bridged between the people of the northeast and what is called mainland India. (IANS)