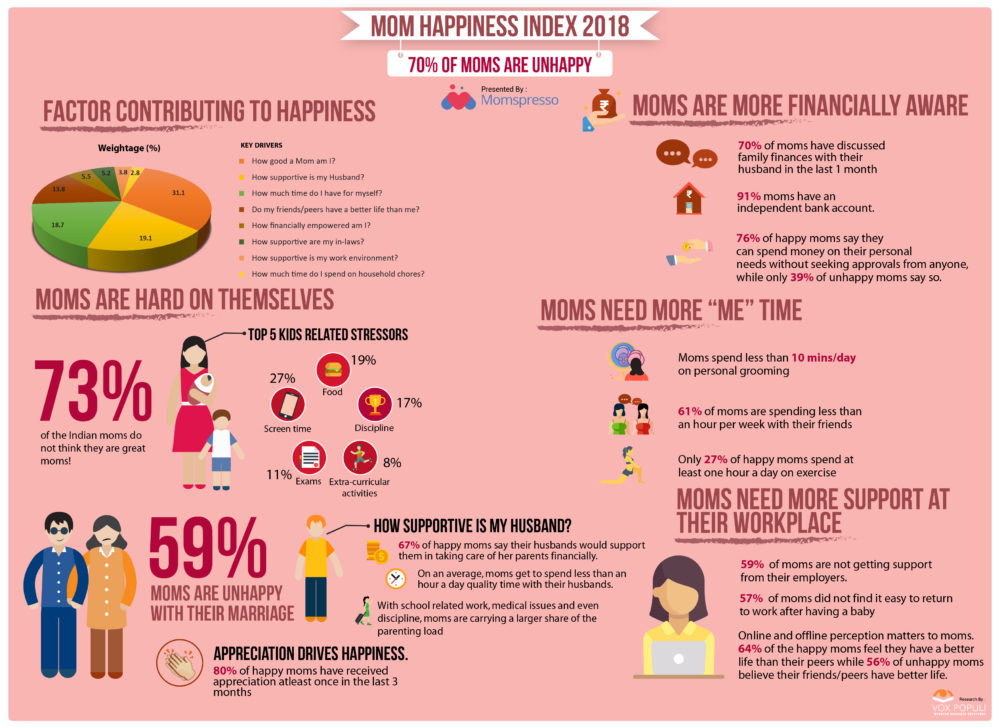 New Delhi-A staggering 59 percent mothers in urban India admit to being unhappy with their marriages, according to a survey by Momspresso, India’s largest user-generated content platform for women. The study was conducted amongst 1,200 urban Indian mothers in the last week of April 2018 to commemorate the occasion of Mother’s Day.

Titled “Mom’s Happiness Index 2018”, the study sought to uncover if urban Indian moms are genuinely happy, as well as the various factors contributing to or taking away from their overall happiness. The objective of the Momspresso-Vox Populi study was to recognize the real person behind the persona called ‘mom’ and create a dialogue on what she goes through, what she is thinking, what she needs from others and ultimately how to up her happiness quotient by tackling those aspects of her life that are problematic or hampering her happiness.

The key finding of the study has been quite startling with about 70% of Indian mothers describing themselves as unhappy. Mothers gave maximum weightage (31.1%) to their own perception of the kind of moms they are, as a key driver of their happiness. Interestingly, however, while 73% of mums thought that they weren’t great at being mothers, they admitted that their children (56%) and their husbands (37%) would rate them as great moms.

The other key drivers of their happiness as per the index were their marriage, their level of financial empowerment, the amount of personal time they got in a day, and the support they received at the workplace and from their peer groups. As far as their top stressors go, mums said monitoring the internet and gadget use of their kids was on top. Managing their food consumption, discipline, academic performance, and extra-curricular activities came next. 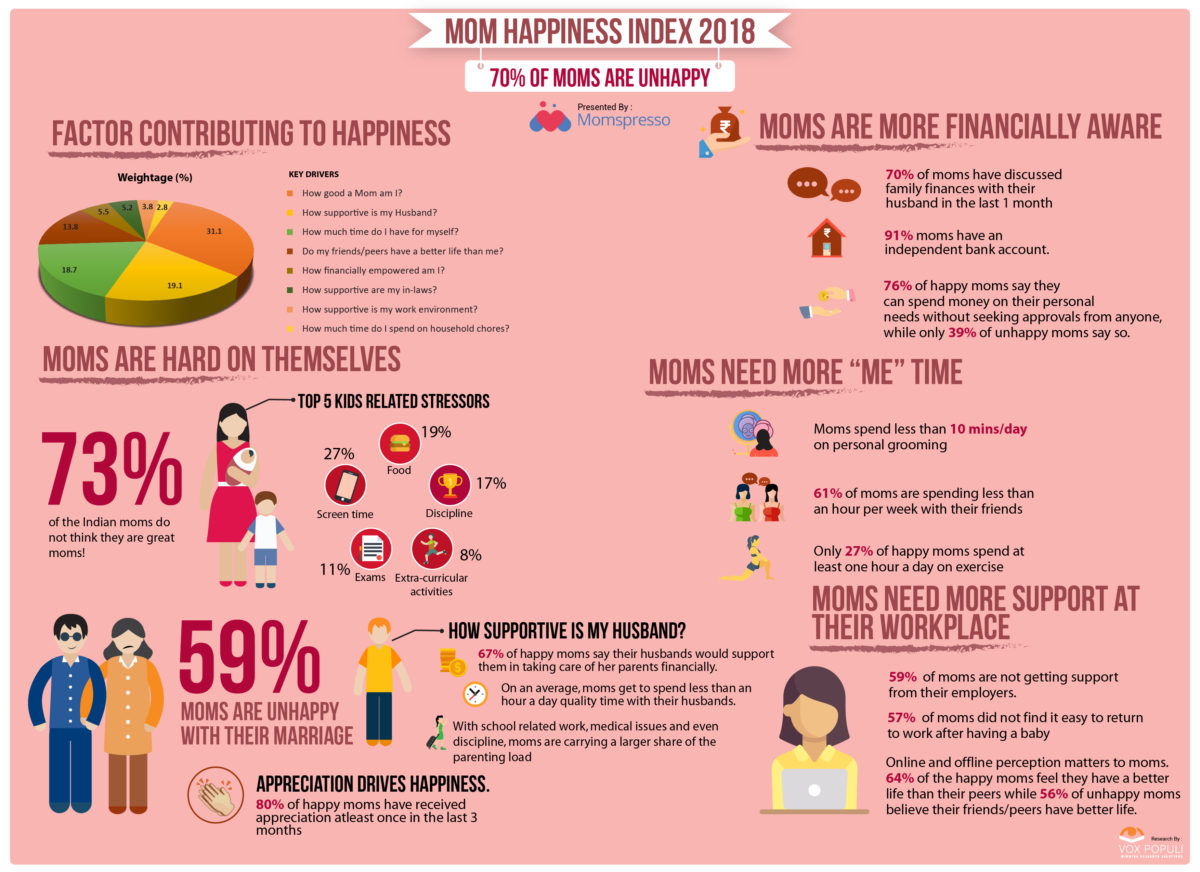 59% moms admitted to being unhappy with their marriages and the unhappiest mothers confessed that they haven’t received any appreciation from their husbands in the last one year. What was interesting to note, however, was that older moms (48%) turned out to be happier than younger ones. Working moms (52%) also emerged as far more content than their non-working counterparts.

Speaking on the study, Vishal Gupta, Co-Founder & CEO Momspresso, said: “Momspresso has always been committed to supporting Indian mothers in their journey as parents as well as women. As a prelude to Mothers Day, we had several brainstorming sessions on how to do something meaningful that would go beyond the day. On delving deep into all the content and blogs on our platform and reading about the joys, exhaustion, challenges and euphoria that Indian mothers feel each day, the one question that continued to beg an answer was –‘Are Indian Moms Happy?’ To answer this pertinent question, we zeroed in on the “Mom’s Happiness Index” initiative with an aim to encourage dialogue and discourse on what moms go through, what they think, what they need and ultimately, how they can be made happier. We hope that this survey will not only foster discussion but also enhance awareness about the true state, the real aspirations and needs of the modern Indian mum today.”

Raji Bonala, Director – Vox Populi Research, added: “From previous research, we knew moms were overworked but we were surprised at the intensity of it. Having said that, we now have robust data from a reliable survey like Momspresso.com’s which shows that there is a transformation from a duty-oriented ‘mother’ to a ‘person’ seeking empowerment and social distinction, who makes a real difference to her family.”