NEW YORK, NY– The United Nations Permanent Forum on Indigenous Issues is holding its 2018 Session at UN Headquarters from April 16-27. The World Sindhi Congress has sent delegates to participate in the Session and bring awareness to the pressing issues affecting the indigenous communities in Sindh, Pakistan.

The UNPFII, a high-level advisory body to the United Nations Economic and Social Council (ECOSOC) aims at providing expert advice and recommendations on indigenous issues to the ECOSOC and UN bodies and to raise awareness, disseminate information, and promote activities related to indigenous issues.

Delegates Zubair Bhambhro, Saghir Shaikh, Farhan Soomro, and Maria Hussain are attending UNPFII sessions and meeting with other delegations as well as the UN Special Rapporteur on Indigenous Issues. WSC delegates also met with the Unrepresented Nations and Peoples Organization to discuss the human rights issues affecting Sindhis and how to best address them to create positive change. 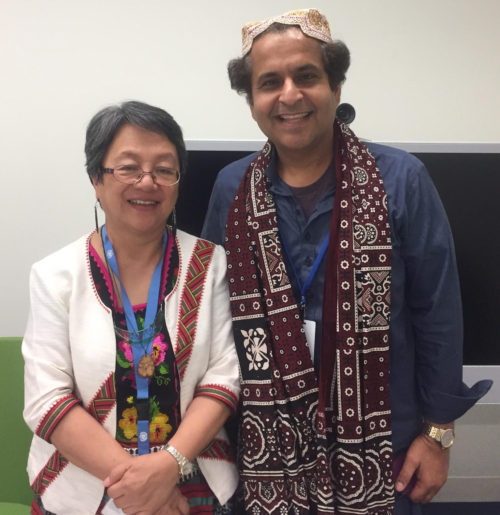 On April 19th, David Barry, a representative from UNPO, delivered a statement on behalf of the World Sindhi Congress to draw attention to the use of enforced disappearance of Sindhi political and human rights activists and journalists who have spoken out against the misappropriation of Sindh’s resources and large-scale development projects such as the China-Pakistan Economic Corridor (CPEC).

Mr. Barry stated, “there are two main under-lying issues with Pakistan’s ambitions: they will result in large-scale environmental damage, and the project’s designs will only further marginalize the indigenous populations most affected by the plans.” He went on to note that Pakistan has not consulted with these communities and has consistently put their land, livelihoods, and culture in jeopardy.

The use of enforced disappearance against rights defenders and journalists has been a highly discussed topic among rights groups as well as in the UN, where Pakistan recently came under scrutiny during its Universal Periodic Review last month. The World Sindhi Congress has been at the forefront of the fight to bring awareness to the issue within international forums such as the United Nations Human Rights Commission.

Delegates from WSC had the opportunity to meet with UN Special Rapporteur on Indigenous Issues, Ms. Tauli-Corpuz, to discuss forced conversions of Hindu Sindhi girls as well as the enforced disappearance of activists. The delegation hopes that these meetings and participation in UN sessions will bring increased awareness to the issues facing Sindhis and prompt stronger international pressure on the government of Pakistan to protect the rights of indigenous peoples.