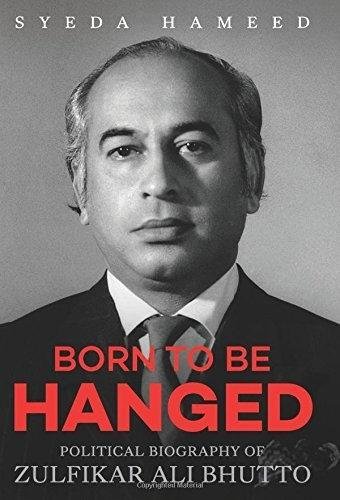 The premise itself sounds interesting. A book by an Indian human rights activist about a Pakistani politician who once famously vowed to wage a 1,000-year war against India.

But the subcontinent and its political upheavals in the modern era have often thrown up contradictions as delicious as Syeda Hameed’s political biography of Zulfikar Ali Bhutto, “Born to be Hanged”.

This one comes in a coarse-covered hardbound book immersed in red and black, colours suggestive of the import of the title. What stands out, however, in the book’s design element is the elegant black and white portrait of the Berkeley-returned politician, whose meteoric rise, mercurial career and monumental end is a defining period in the history of Pakistan.

Hameed’s well-researched book is a product of 20 years of painstaking labour, coupled with access to the Bhutto family’s personal library and interviews with Pakistan People’s Party co-founder Mubashir Hassan.

Accessing letters from the library, Hameed brings to the fore previously unknown facets of Bhutto’s personality, many elements of which bloomed at a tender age. The letter from the late Prime Minister to the Father of Pakistan, Mohammad Ali Jinnah, for example, betrays the makings of an ideology deeply rooted in religion and the inevitability that there could never be a truce between Hindus and Muslims in the subcontinent.

“Musalmans should realise that Hindus can never and will never unite with us, they are the deadliest enemies of your Quran and prophet,” Bhutto, only 14 then, wrote to the Quaid-e-Azam in 1943 from his home in the city of Larkana in Pakistan’s Sindh province.

The book is spread over four major parts, each of which delves into details about the key phases in Bhutto’s life as a person and as a personality. However, the author also goes to lengths to underline how socialism crept into the psyche of the young Bhutto: A principle he vehemently believed in, but one which he conveniently abandoned once the going got tough for him as a politician.

Hameed says the introduction to Marx for Bhutto came in the form of a gift on his 21st birthday, along with a biography of Napoleon, also considered a hero by the young Sindhi. Over the years, a mixture of University of Berkeley and Oxford and Pakistan and its division-ridden society got him working on a passion which married socialism with Islam.

The book then goes on to narrate the second key phase in his life, when he was sworn in as Minister for Commerce in the government at the age of 30 and as Pakistan’s Foreign Minister at 35 in a dispensation headed by Mohammad Ayub Khan, his benefactor, whom he later denounced as a dictator and hence had to face incarceration.

Here, Hameed, sometimes through gentle nudges, suggests how Bhutto the socialist gradually took a backseat and Bhutto the politician who brooked no stopping gradually started pushing the realpolitik pedal.

“Declaring Friday as holiday, closing down ‘dens of vice’ like bars and cabarets, stopping short of ordering chopping of hands and feet for theft (it would happen later) was how Islamisation played out on the ground. All this he did against his grain, against his better judgement,” the author writes.

Hameed, through her conversations with Mubashir Hassan, and other published references, takes the reader through the phase which saw Bhutto’s career peak in the 1970s, when he became in 1973 the country’s 10th Prime Minister before General Zia ul Haq’s coup, which led to his incarceration and his eventual sentencing to death, following a sham trial. Hameed argues that the trajectory and the journey of his life, leading to his hanging, was destined, just as Oedipus was wedded to his fate.

Through a less quoted work of journalist-politician Rafiuddin Ahmed, Hameed tries to recreate the last moments of Bhutto’s life before he was hanged at the central prison in Rawalpindi, putting an end to the life of the doyen of Pakistani politics but inadvertently giving birth to the dynasty that followed. (IANS)