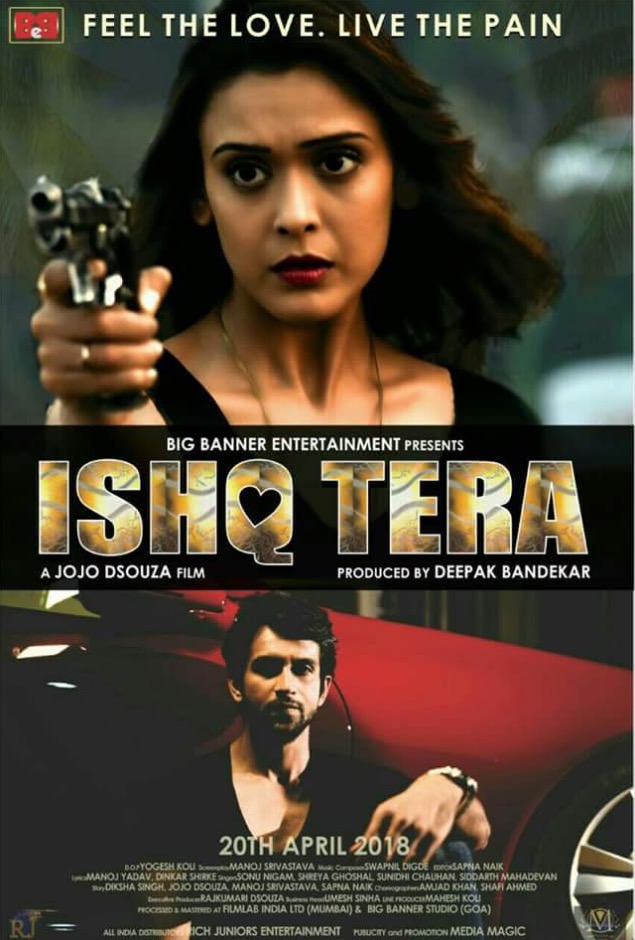 “Ishq Tera” is a film that approaches its subject so blatantly that it almost screams deafeningly. The story wants to be about love, but is also about madness, and somehow it does not weave the two together with a charm that would otherwise be heart-warming in real life.

Apparently based on real life events, it is the story of a schizophrenic and her devoted husband. Their tale lacks chemistry, history and geography.

The narrative begins with establishing that Kalpana (Hrishitaa Bhatt) had an abused childhood. Traumatised after the death of her sibling and mother, she suffers from schizophrenia and her personality alternates with her alter ego. During her good periods, she is docile and demure as Kalpana and she is outrageously flirty and abusive with mankind as Laila, during her bad times.

Between the periods of her insanity, Kalpana meets Rahul (Mohit Madaan) who gets besotted with her. They get married. But their romance is not made in heaven for there is no-chemistry between them and one fine day, Kalpana announces that she is pregnant.

Six years later, Kalpana still suffering from her mental illness, leads an independent life along with her daughter (Kavya). She works in an advertising agency facing sexual harassment from her boss (Manoj Pahwa) and falls in love with her colleague. Rahul lurks in the background of her life, hoping that his love and patience can help Kalpana overcome her problem.

The script, credited to the team of four; Manoj Srivastava, Sapna Naik, Diksha Singh and Director Jojo D’souza, is absurdly tedious and convoluted. The plot and the dialogues are mediocre and amateurishly crafted. Needless to say that the narrative has no consistency and it meanders at points. On the directorial front, there are scenes that are shoddily mounted. Also the characters are shallow and cardboard thin with no depth or motive.

The film is Hrishitaa’s canvas. She usually plays sane characters. With natural physical grace, she is able to build an essentially wordless performance out of expressions and gesture. She aptly swings in an instant, from calm to rage, picking on little things that set her off. It’s a convincing performance.

Mohit Madaan, in a somewhat thankless role, seems like a Hrithik Roshan clone, despite having a pleasing screen personality. It is sad that the script does not back him to let us see that his love for his wife underlies all his decisions.

The duo is aptly supported by a cast that is sincerely earnest.

But overall, the film is a poor sell. (IANS)